‘It could happen to you’: inside the shocking true story of the docuseries Love Fraud 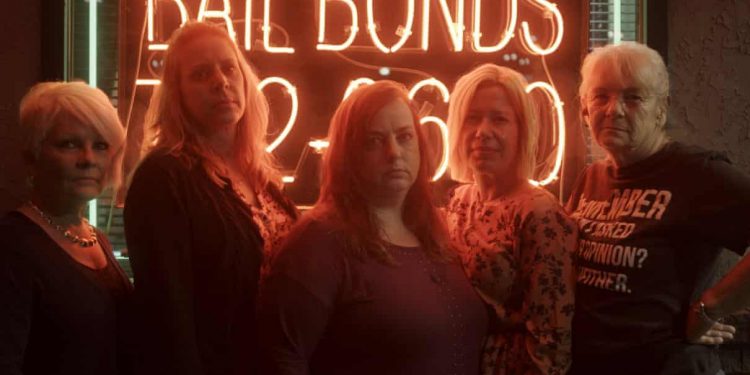 Tracy, a single working mother in Kansas City, Missouri, thought she had lucked out when she swiped right on a guy named Mickey in 2016. “Dating in your 40s sucks,” she says bluntly in the opening minutes of docuseries Love Fraud. “It seems like your only choice is to go online to meet anybody, but it’s hard.” Mickey’s profile said he was a pilot, the owner of a real estate company, religious; his photo was of a nondescript, middle-aged white guy. But things barreled ahead – just weeks later, he proposed marriage with a ring he said was paid for with money from a medical malpractice suit. He bought a sports car in her name, “for us”, and demanded the wedding happen as soon as possible. Then he disappeared.

With the help of her daughter, Tracy began to piece the shards of her relationship back together on a homespun, humorously unsparing blog dedicated to Mickey – or, as the man named Richard Scott Smith was known to his other duped wives across Kansas, Rick, Scott, and Mick. He had pulled the same bait and switch, with women’s modest but critical life savings, credit, and visions of kind companionship, with Sabrina, and Karla, and Ellen. And Rachel. And Jean. And numerous other women, whose manipulation and quest for clarity, redemption, and revenge is chronicled in Love Fraud. The four-part series plunges beyond where the investigative chorus of the blog began: “Has this man victimized you?” it asks. There are 50-plus comments. Still married to him? “I am,” wrote one. Still trying to divorce him? “Me too.”

The four-hour series, directed by Rachel Grady and Heidi Ewing, is part vigilante justice, part unraveling of what allowed a seemingly unremarkable guy to prey on dozens of women seeking the modest bar of dateable, middle-aged men. Love Fraud zigs and startlingly zags – there are several “wait…what?!” moments amid efforts to pin down Smith’s location, history, or motives. But it orbits around a worrying truth, as reiterated by each of the many women who speak to the film-makers: “Anyone is vulnerable to being emotionally conned,” Grady told the Guardian. “We all want companionship.”

The first two episodes color in, with extra heapings of weird midwestern gothic and a kaleidoscopic, wicked illustration scheme by the collage artist Martin O’Neill, the destruction left in Smith’s wake. Women sort through the digital detritus of modern relationships – text messages, selfies, videos, pleading voicemails, screenshots of Facebook posts – and their un-deletable consequences: ruined finances, shattered trust, broken relationships, rage. As more of the women become aware of the blog, the film-makers capture a revenge plot unfolding, as a Kansas-based bounty hunter named Carla – the protagonist of her own movie, dragging on a cigarette and issuing statements like “I will kill any man who touches me again” – takes the case pro bono.

Though local justice systems had put out warrants for Smith’s arrest by 2017, there was no movement to catch him. The coordinated effort between the film-makers and the women stands in for authorities, and by the second episode, the camera is on the trail, finding Smith’s next victim and staking out a questionable Wichita joint called Krab Kingz.

It only gets weirder from there, though part of the mystery is Smith’s seemingly unremarkable personality; in photos, videos, voicemails and stories, he remains an un-suave cipher, a hole of flat affect and professed emotional need whose middling gains – a car, a couple thousand – at the expense of broken lives defy reason. He’s a “nickel and dime con man”, says Carla – someone who accrues little financial gain for outsize emotional harm.

“It takes a very twisted individual to seek that payment,” said Ewing. He’s “a true predator”, Grady added, where “part of it is just the hunt”.

Portions of the series delve into Smith’s dubious family history and stories of emotional and physical abuse, aligning with the fact that while filming throughout 2018, “we were trying to figure out what his goal was,” said Grady. “He would leave these relationships and these women in tatters, humiliated, their credit broken, but he wouldn’t walk away with a fortune, or really anything to show for it.”

But the series’ strength, and the nadir of Smith’s con, is in the union of wronged women, especially women – in this case, lower-to-middle class, suburban, middle-aged, mostly white – whose stories of manipulation were ignored or degraded by the justice system. “Nobody is gonna be active on the streets looking for him, except us,” says Carla in a meeting with several of Smith’s exes in Kansas City, after Tracy notes that her local sheriff said he wouldn’t waste his time on her case after Smith skipped out of his jurisdiction.

“It’s not like I said: ‘Hhere’s my checkbook, here’s my identity, have fun’,” Sabrina explains. “This is a whole game, he’s been doing this for years.” For identity theft, he got probation – “no, the law don’t care,” Carla says. The justice system’s line, as the women have experienced it, appears to be: you’re responsible for your own emotional manipulation.

“If you date the guy that conned you, you’re screwed in the justice system,” said Ewing. “They blame the women – they blame you for being silly and stupid and naive. What we encountered was: those claims are not taken seriously at all.”

“He gave them a reason to unite,” said Ewing on the ad hoc blog community and the women who meet up in the film, swapping stories of Smith’s various deceptions with a laugh, sometimes a shudder. “There’s something about uniting in revenge: when wronged people get together, powerful things happen.

“I think some men are going to look at [this series] with terror.”

That reclaiming of the story – from one of many screwed over to pursuing the truth – forms the thrust of Love Fraud, throughout which courses a swift and refreshing river of undiluted, unvarnished female rage. “The best way to get over a guy is revenge,” says Sabrina. “I’m sorry, it is. I’m getting tired of this bullshit. Rick, you lying sack of shit, you fucked me, I am fucked, Rick. Buddy, I’m coming after you.” No spoilers on the series’ conclusion, but legal consequences aside, a documentary series on deception – in which the face of a man who relied on pin-balling anonymously through the midwest in to perpetuate the same fraud over and over – represents “next-level revenge”, said Grady.

Still, the film-makers hope the ultimate message of the project is kinder – if not to embark on the quixotic journey of making sense out of the undeserving enigma that is Smith, then to take the women’s experiences seriously, and personally. “I hope that people can touch on empathy for people,” said Grady, “instead of going to that instinct of ‘this could never happen to me, these people are stupid’.