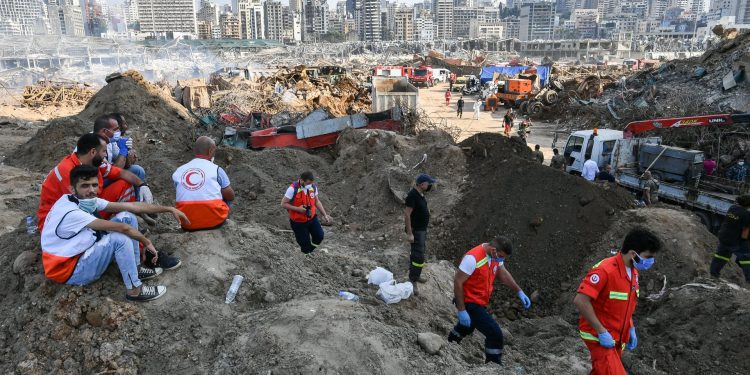 Houston residents Leila Woheidy and her mother were on the phone with her grandmother back in Lebanon when they suddenly heard screaming on the other end of the line.

“She was screaming for God and thought it was an Israeli airstrike,” Woheidy said. “Then the phone cut off.”

Panic shot through Woheidy and her mother. Then they saw the news of a gigantic explosion in Beirut – just minutes from her family’s apartment.

“Electricity was down and we had trouble connecting with everyone. We were just making sure all of my family was alive and accounted for,” Woheidy said. “We FaceTimed my uncle and his face was white. My cousin was hysterically crying. We couldn’t even talk to her. This came out of nowhere.”

For many members of the Lebanese diaspora in America, and their families, the disaster in Beirut has had a profound impact: a reminder of distance and an inflictor of loss made all the worse by the coronavirus crisis raging around the world, but hitting especially hard in Texas.

There are an estimated 30,000 to 40,000 Lebanese people living in Houston, a sprawling Texan city that has become one of the most diverse in America, attracting communities from across the world. Those communities have changed the face of Houston, but they also mean links to former homelands remain strong – in good times, and also in bad.

The blast at the city’s port leveled a huge swath of the city and has killed at least 137 people and injured more than 5,000. The sound of the explosion – which many blame on a store of ammonium nitrate in a dockside warehouse – could be heard as far as Cyprus. But the wave of shock it sent has been felt across the world wherever there is a Lebanese community.

Woheidy was able to confirm the whereabouts of her family but she said she feels hopeless because of her inability to be with them due to Covid-19 travel restrictions.

“There’s a sense of guilt that I’m here in the US and everyone over there is suffering,” Woheidy said. “The best thing I can do is donate. I don’t even know if banks were blasted. It’s difficult to gauge how to assist at the moment.”

Local Arab-owned businesses are donating profits to provide financial support directly to Lebanese families. Marble Bliss Sweets shared a post on Instagram to let customers know all profits from its cupcakes will be distributed directly to the cause.

Dalila Hamdi, the owner of Marble Bliss, said: “I love baking, so I thought, ‘Why not give people an incentive to donate?’ We know a dollar here goes an extra mile over there.”

Hamdi’s fiance is Palestinian but his family lives in Lebanon.

“Some [of his family] are in the city and others are in the camps,” Hamdi said. “He was really frantic. He got on the phone with his parents right away. They were hard to reach.”

Bassel Choucair is the vice-president of the Islamic Society of Greater Houston. He is also from Beirut. Choucair was in a meeting when his mother called him to tell him about the explosion.

“She said she was sitting on the balcony and the electricity went off. [The explosion] kind of rushed her into the kitchen,” Choucair said. “She had glass in her feet. She was crying and was really shocked.”

Choucair’s mother sent him pictures of her damaged apartment.

“My mom lives about two miles from the port. All of her glass and door frames are gone. It’s all mangled,” he said. “My mom is there. My sister is there. All of my aunts and uncles are there.”

Choucair said the effects of the explosion were compounded by the economic turmoil in the country and Covid-19.

“Most imports and exports come through that port. This is going to make things really bad. People are going to need money,” Choucair said. “The hospitals were all full even before this from Covid-19. My sister told me they put hospital beds in the streets.”

Despite each setback, Choucair has hope for Beirut and for Lebanon.

“Lebanese are resilient folks. I grew up there until I was 18. We’ve been through wars,” Choucair said. “It’s going to take a while with Covid and the economy but inshallah [God willing], the Lebanese will stand on their feet again.”