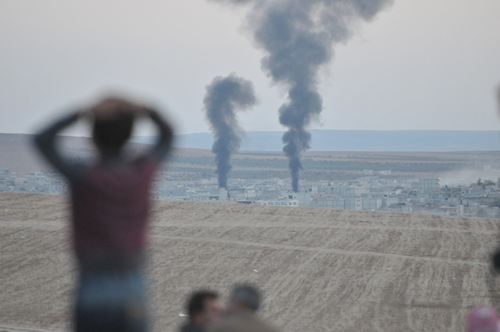 An explosion after an apparent US-led coalition airstrike on Kobane, Syria, as seen from the Turkish side of the border, near Suruc district, 29 October 2014, Sanliurfa, Turkey

Brussels (Brussels Morning) Less than a month since the 21 May ceasefire was signed between Israeli and Hamas forces, explosions are again rocking the Gaza Strip, as Israel’s new government ordered air strikes on Hamas positions in retaliation for incendiary balloons sent towards southern Israel.

The Israeli Defence Forces (IDF) confirmed that its planes executed air strikes on alleged military compounds under the control of Hamas, situated in the Gaza City and Khan Younis. No reports of casualties or fatalities were provided.

According to the Israeli side, the attacks were a response to “terrorist activity” taking place in the compounds, specifically the launching of “arson balloons” directed towards Israeli settlements, a continuation of the practice in which Hamas militants send balloons or kites carrying burning fuel or explosive devices across the border.

The balloons, Hamas claims, were launched in response to a far-right rally that took place in East Jerusalem on the anniversary of its occupation by Israel. Hundreds of nationalist Israelis gathered in front of the Old City’s Damascus Gate on Tuesday, marching to the Western Wall, one of their holiest sites. The Palestinians, who hold that East Jerusalem is rightfully Palestinian territory and refuse to acknowledge its annexation, regarded the rally as a provocation.

Israel’s new Foreign Minister, Yair Lapid, slammed the extremists that took part in the rally, saying that the fact that Israeli flag represents hate and racism for some is “abominable and intolerable”. He condemned their cries of “Death to Arabs”.

Despite Lapid’s swift condemnation of extremist incidents, the rally was held with the blessing of the new government, headed by the right-winger Naftali Bennett. More than 30 Palestinian protesters were injured as police cleared the route for the rally, arresting 17 in the process. people

The air strikes, which were executed early on Wednesday, were the first ordered by the Bennett government, and defied calls by the international community for restraint ahead of the nationalist rally.