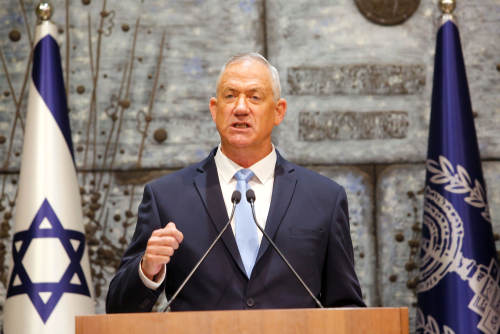 Israeli President Reuven Rivlin (R) presents Blue and White party leader Benny Gantz with the mandate to form a new Israeli government at the President's residence in Jerusalem, on Oct. 23, 2019.

Brussels (Brussels Morning) Israel’s President Reuven Rivlin has handed the mandate for forming the country’s next government to the outgoing Prime Minister Benjamin Netanyahu, after his centre-right party Likud emerged as relative winners in the parliamentary elections, Deutsche Welle reported.

The mandate offer affords Netanyahu, currently Israel’s longest-serving prime minister with an accumulated 12 years in office, another chance to remain in power. However, the odds are low that he will be able to gather enough support in the splintered Knesset – the Israeli parliament – to forge a viable coalition.

“No candidate has a realistic chance of forming a government that will have the confidence of the Knesset”, Rivlin said, in announcing Netanyahu’s nomination. He had reached his decision based on the number of recommendations made by lawmakers, which, he said, indicated that the incumbent PM has “a slightly higher chance” of forming a government, hence the decision “to entrust him with the task of doing so”.

President Rivlin acknowledged that many believed the mandate should not be given to a candidate facing criminal charges, although he opted to do so anyway. Netanyahu is currently on trial for corruption – accused of accepting improper gifts and trading favours with powerful media moguls.

Netanyahu’s party currently holds the most seats in the Knesset – 52. This is nine seats short of an absolute majority in the 120-seat parliament. Now that he has been handed the mandate to form a government, Netanyahu has a deadline of 28 days in which to assemble sufficient support for a majority in the Knesset.

Once the deadline is reached, Rivlin can extend it for a further two weeks, select another candidate to try and put together a majority, or ask the Knesset to propose one. If it turns out that no candidate can win majority support in the parliament, Israel could then be headed for fresh elections, the country’s fifth in two years.