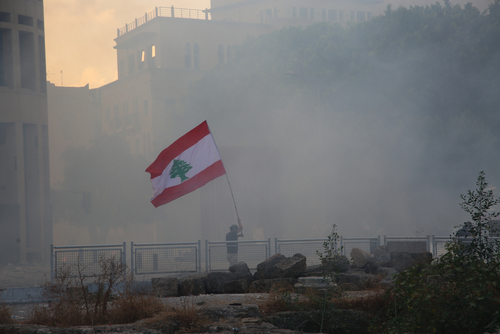 August 8, 2020: Protesters in Beirut Downtown after the tragic explosion happened in Port of Beirut on August 4, 2020 - Beirut Lebanon

Brussels (Brussels Morning) Israeli artillery fired shells on Lebanon today, in what the Israeli forces claim was retaliation for rockets fired earlier from Lebanese territory into Israel, which caused no damages or casualties.

In an official statement, the Israeli Self-Defence Force (SDF) confirmed it has shelled southern Lebanon, saying that two rockets were previously fired from Lebanon, one of which fell into an open area. The other was intercepted and taken down by the army’s anti-air defences.

The retaliatory strike reportedly hit the Wadi Hammoul area, at a location where, according to the Israeli military, launching pads for Grad rockets are situated. No combatants or civilians were injured during the strike, and no damage was reported.

Israel’s right-wing Prime Minister Naftali Bennet visited a town near the Lebanese border later in the day, where he promised that anyone “who tries to harm” Israel will “pay a painful price”.

The rocket attack from Lebanon took place just hours after Israel reportedly carried out several airstrikes in Syria, near the city of Aleppo. According to the London-based Syrian Observatory for Human Rights NGO, the Israeli strikes targeted weapons depots belonging to Iran-backed militant groups.

Israel’s Defence Minister Benny Gantz openly blamed Lebanon for the rocket attack. He warned that his country would not allow the political and economic crisis in the neighbouring country to turn into a security threat. However, he did not elaborate on what Israel might do to prevent such an eventuality.
Lebanon is currently facing a near year-long government crisis, dating back to when former Prime Minister Hassan Diab resigned after the devastating explosion in a Beirut port warehouse that razed several city districts and killed hundreds. The most recent attempt to form a government just failed as PM-designate Saad Hariri gave up. Meanwhile, the EU is threatening to impose sanctions on Lebanese politicians deemed responsible for the ongoing political crisis.