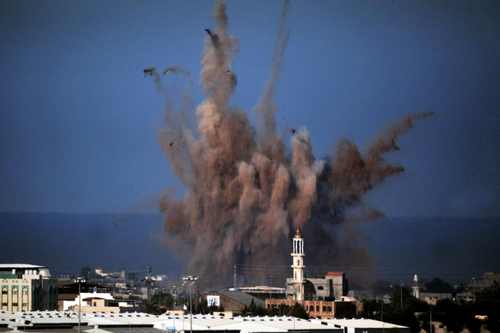 Paris (Brussels Morning) At least 20 people were killed in Israeli airstrikes on Gaza, retaliating to earlier rocket fire by Hamas militants from the Gaza strip towards Jerusalem and southern Israel, more than 80 kilometres away. The Hamas-controlled Gaza government also said that three children and a Hamas official were among the dead.

The escalation came at the end of days of violent clashes among Palestinian protesters and the Israeli police, with hundreds of people wounded in and around the compound of the Al-Aqsa mosque and the Old City of Jerusalem. The Red Crescent said that more than 300 people were injured on Monday as police stormed the compound where thousands had barricaded in anticipation of the clashes. Police fired rubber bullets, stun grenades and tear gas in response to protesters tossing rocks. Unrest and reports of police violence spread in many parts of the occupied West Bank and Gaza, while the international community calls for restraint.

On Friday evening, more than 200 people, mostly Palestinians but also Israeli police officers, were injured in the most violent clashes since 2017 around the al-Aqsa mosque and the Temple Mount, two of holiest places both for Islam and Judaism and focal of tensions. Clashes continued over the weekend in other areas of East Jerusalem, leaving more than a hundred injured, adding to a spur of violence in East Jerusalem during the Muslim holy month of Ramadan.

Central to the Palestinian fury is the threatened eviction of the Sheikh Jarrah neighbourhood residents in favour of Jewish settlers. The Supreme Court decision on Sheikh Jarrah, initially due on Monday, was delayed and a new date will be announced within the next 30 days. But the families facing eviction fear that the court decision will go forward as soon as tensions die down.

The question comes under the wider issue of the status of East Jerusalem where the ongoing Israeli strategy is to force Palestinians out to expand Jewish settlements.

Residents of the area and the Palestinian authorities accuse Israel of effectively seeking a change to the demographics of Palestinian-majority cities and neighbourhoods, including East Jerusalem, thus preventing any peace plan that would include East Jerusalem as the capital of a future independent Palestinian state. They see an attempt to create facts on the ground in order to evict its residents, saying that this could amount to ethnic cleansing. In the meantime, the UN has said it could constitute a war crime, as the international community does not recognise any Israeli annexation of East Jerusalem.

A march by ultra-nationalist Zionists planned later in the day caused even more tension as they celebrated “Jerusalem day”, the anniversary of capturing the holy city during the Six Day war of 1967. Flag-waving Jewish nationalists hold a parade towards the holy sites of the city, a provocation according to Palestinians, which also coincided this year with a holy Ramadan night. In an attempt to appease tension police banned groups from approaching the Damascus gate, which leads to the Palestinian quarters, thus blocking Israeli nationalists from reaching the Temple Mount, but the parade was held, nonetheless.

Israel has come under intense international criticism over the police response in and around Al-Aqsa mosque, as well as the planned eviction of Palestinian families, but now attention has shifted to the escalation blamed on rockets fired from Gaza. Hamas issued an ultimatum to Israel demanding that it withdraws its forces from al-Aqsa, then moving to fire missiles towards Jerusalem, in the first such move in years.

Israeli PM Benjamin Netanyahu defended his handling of the violence and hailed the firmness of the security forces, while saying that his government would “firmly reject” any outside pressure in handling the situation. He later denounced the Hamas missiles as a red line which the group had crossed and promised to respond in full force.

Calls for restraint on both sides multiplied on Monday as Western governments denounced the rocket attacks and regret for civilian deaths. The UK, Germany and France also expressed their fears of an imminent escalation, while the EU’s High Representative for External Affairs Josep Borell told a news conference that, “The situation with regard to evictions of Palestinian families … is a matter of serious concern. Such actions are illegal under international humanitarian law and only serve to fuel tensions on the ground”.

State Department Spokesman Ned Price condemned the barrage of rocket attacks into Israel but made no mention to the Israeli retaliation in the Gaza Strip, Al-Jazeera reported.

“On a call over the weekend with his Israeli counterpart, our National Security Adviser Jake Sullivan reiterated concerns about the potential evictions of Palestinian families from their homes, and they agreed that the launching of rocket attacks and incendiary balloons from Gaza towards Israel is unacceptable and must be condemned”, White House Press Secretary Jen Psaki said during a news conference. Washington expressed “serious concerns” about the violence but the Biden Administration is yet to denounce the Israeli airstrikes, police response or the expected eviction, seen as a foregone conclusion despite the court decision delay.

The UN Security Council met to discuss the situation in an emergency meeting but stopped short of issuing any resolution. Ahead of the meeting, UN Secretary-General António Guterres called on Israel to “cease demolitions and evictions, in line with its obligations under international humanitarian and international human rights law” and exercise “maximum restraint” in dealing with protests.

The group of countries that make up the “Quartet” of negotiators in the Israeli-Palestinian conflict — the UN, US, EU and Russia — called for restraint as violence intensified. The Arab League had earlier called on the international community to intervene to prevent any evictions, whereas the governments of Bahrain and the UAE criticised the Israeli response to the al-Aqsa worshippers. Turkey called on “the world to act to end this unending Israeli aggression against unarmed civilians in their own land”.