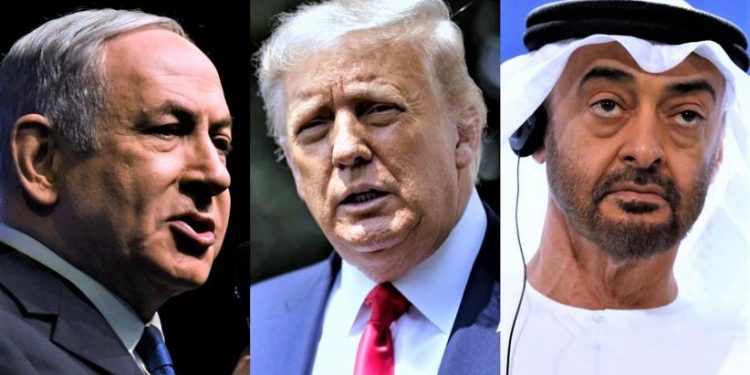 Israel and the United Arab Emirates have agreed to establish full diplomatic ties in a historic Washington-brokered deal under which Israel will “suspend” its plans to annex parts of the Palestinian territories.

However, cracks in the deal became quickly apparent after its announcement on Thursday, with Israel’s prime minister, Benjamin Netanyahu, saying there was “no change” to his annexation plans, while the UAE insisted that it “immediately stops annexation”.

After Jordan and Egypt, the UAE is only the third Arab country to announce formal diplomatic relations with Israel, and the announcement will reverberate across the Middle East, which has a turbulent history with the Jewish state.

Donald Trump, who is facing a tough presidential election on 3 November, played up the deal as a significant foreign policy win.

“Everybody said this would be impossible,” the US president told reporters at the White House. “After 49 years, Israel and the United Arab Emirates will fully normalise their diplomatic relations. They will exchange embassies and ambassadors and begin cooperation across the board and on a broad range of areas including tourism, education, healthcare, trade and security.”

He said the tenor of the three-way phone call he had with Israeli and UAE leaders “was like love”. Similar agreements were being discussed with other countries in the region, he added, without giving details.

Israel has also cultivated ties with Saudi Arabia, Oman and Bahrain. Asked about who might be next in line to establish diplomatic relations, Trump’s son-in-law and adviser, Jared Kushner, said: “We have a couple who are upset that they weren’t first.

Surrounded by his top aides in the Oval Office, Trump described the pact as a “peace agreement”. However, the UAE’s Crown Prince Sheikh Mohammed bin Zayed Al Nahyan later tweeted that the country had agreed instead to “cooperation and setting a roadmap towards establishing a bilateral relationship”.

For Netanyahu, Israel’s hardline and longest-serving prime minister, the announcement is also a significant boost. For years, Netanyahu has attempted to build relationships in the Middle East while at the same time entrenching Israel’s control over Palestinians. Now, despite having threatened to permanently seize occupied land, he has won a hugely symbolic victory. “A historic day,” the 70-year-old leader wrote on Twitter.

For the Palestinians, who have long relied on Arab backing in their struggle for independence, the developmentwill be seen as a big setback in their attempts to increase international pressure on Israel until a full peace deal has been agreed.

The official Palestinian news agency reported the Palestinian ambassador to the UAE was being recalled.

The Palestinian politician Hanan Ashrawi accused the UAE of abandoning the Palestinians. “May you never experience the agony of having your country stolen; may you never feel the pain of living in captivity under occupation; may you never witness the demolition of your home or murder of your loved ones. May you never be sold out by your ‘friends’,” she wrote on Twitter.

Announced in a joint statement by Israel, the UAE and the US, the deal will see Israeli and Emirati delegations meet in the coming weeks. The statement said they would sign agreements on investment, tourism, direct flights, security, telecommunications, technology, energy, healthcare, culture, the environment, the establishment of reciprocal embassies, and “other areas of mutual benefit”.

At Trump’s request, Israel “will suspend declaring sovereignty” over parts of the West Bank, it said.

The UAE’s ambassador to Washington, Yousef Al Otaiba, said in a statement: “The agreement immediately stops annexation and the potential for violent escalation. It maintains the viability of a two-state solution as endorsed by the Arab League and international community.”

In contrast, Netanyahu said in a Hebrew-language televised announcement there was “no change in my plans for annexation, with full coordination with the US”, suggesting it was only temporarily on hold.

Despite the UAE not formally recognising Israel, the two countries have increased ties significantly over the years, in part due to their shared enmity towards Iran, but also because Abu Dhabi craves Israeli security and intelligence technology.

The UAE ambassador to the US infuriated Palestinians when he attended Trump’s unveiling of his vision for Middle East peace at the White House in January. It granted Israel a wishlist of its long-held demands and was rejected by the Palestinians, who were promised a broken-up “state”.

Palestinian leaders and several other Arab countries have watched the budding alliance with concern it could fragment a once-unified voice. The deal came as a surprise even to some countries with a clear stake in the Israel-Palestine issue. And while diplomatic ties with its neighbours have long been argued to be an incentive for Israel to end the occupation, that theory is now being tested.

The US secretary of state, Mike Pompeo, said the deal was a long time coming. “So it’s been many years obviously that this has been in the works, but certainly over the last few months we’ve been working diligently to find a place where everyone could get comfortable that this was the right way to move forward,” he told reporters.

In his Oval Office announcement, Trump repeatedly stressed the political significance of the agreement for the US, contrasting his achievements with the shortcomings of his predecessor, Barack Obama, and his Democratic challenger in the November election, Joe Biden.

His aides took turns to praise Trump for his role in sealing the agreement, beginning with Kushner, who said his father-in-law worked to “unite people”.

Robert O’Brien, the national security adviser, claimed Trump had transformed the region. “You came into office with a region that was really aflame, and you brought peace to that region and there’s more to come,” O’Brien said. “So it’s an honour to be part of your team and to serve under your leadership.”

Biden welcomed the agreement as historic. “The UAE’s offer to publicly recognise the state of Israel is a welcome, brave, and badly needed act of statesmanship,” the presidential contender said.

The announcement was equally lauded by several pro-Israel voices, including the American Israel Public Affairs Committee (Aipac), an influential US-based lobby group, which described it as a “breakthrough”.

However, IfNotNow, a more progressive, anti-occupation movement of American Jews, said there was “nothing to celebrate”.

Its political director, Emily Mayer, said the deal was an attempt by Trump and Netanyahu “to distract from their catastrophic failures in leadership as they face an ongoing pandemic, economic crisis, civil unrest, and plummeting support from the public in the US and Israel”.

She added: “Once again, Palestinians, who are not mentioned in this document, are treated as political pawns and excluded from decision-making about their own future.”