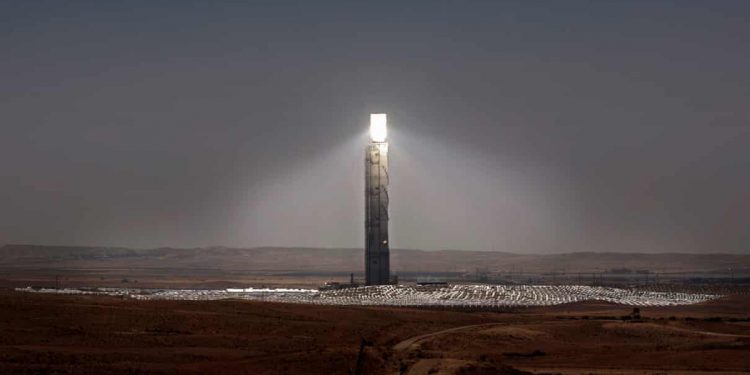 Israel is considering buying solar power from its neighbour and former enemy, Jordan, in a potentially historic deal that could help the country meet ambitious new renewable energy targets.

In a letter seen by the Guardian, energy minister Yuval Steinitz told environmental activists the ministry supported a pilot initiative in which Jordan would transfer 25 megawatts to Israel’s national grid, enough to power several thousands of households.

EcoPeace, an organisation of Israeli, Jordanian, and Palestinian environmentalists, has been pushing for the project, arguing that Jordan’s access to large amounts of land and sunshine means it could sell electricity to Israel cheaper than the country could produce it.

“Electricity has never crossed the Israeli border from any neighbouring country,” said Gidon Bromberg, the Israeli director of EcoPeace. “We are calling for a Middle East green deal.”

The advocacy group had shared the letter with the Jordanian government in the hopes of an agreement. The kingdom already buys natural gas from Israel despite domestic opposition against deals with a former foe. Jordanian renewable businesses had also expressed interest, EcoPeace said.

However, the environmentalists warn that recent Israeli threats of annexing parts of the Palestinian territories have halted progress, and could scupper their plans if they materialise. The Guardian contacted Jordan’s foreign and energy ministries for comment but received no response.

In June, Israel’s energy ministry unveiled an 80bn shekel (£18bn) proposal to increase the percentage of its renewable energy to 30% by 2030, a goal seen as demanding considering the country’s lack of available free land.

Despite year-round sunshine and a global reputation for hi-tech green innovation, Israel remains sorely behind other developed countries in clean energy use.

At the end of last year, the country was producing about 5% of its electricity from solar energy, with the majority derived from coal and cleaner – but still a fossil fuel – natural gas. Portugal, despite its weaker economy, produces around 30% of its power from renewables.

Achiam Tigger, the CEO at Negev Energy Operation and Maintenance, who runs an Israeli solar power plant, said reaching the government’s renewable energy targets would not be “a piece of cake”.

Outside his office in the Negev desert, a vast sea of concave mirrors concentrate the sun’s energy into pipes of oil leading to a gigantic molten salt battery. The mirrors rotate throughout the day to capture the best sun rays, while the heated salt battery can provide energy at night.

Tigger’s plant forms part of the Ashalim megaproject that also includes the world’s tallest solar tower, which at a distance appears just above the horizon like a rising second sun. On closer inspection, the 250-metre concrete pillar resembles a blinding Eye of Sauron.

More than 50,000 mirrors, gathered around the base amphitheatre-style, redirect sunlight to a boiler at the top of the tower. The boiler is jet black, but the intensity of the reflected solar energy makes it too dazzling to look at directly. Inside, superheated steam is created to spin turbines at vast speeds and produce electricity.

A third plot nearby uses thousands of photovoltaic (PV) panels, the types of which are seen on household roofs, converting sun rays directly to electricity.

While an attention-grabbing symbol of the country’s energy ambitions, the three projects that began commercial operations last year provide just about 2% of Israel’s total energy supplies.

“It’s a challenge,” said Tigger of government targets but added it would be possible for Israel to boost its solar power with cheap, PV panels that can be rolled out quickly. Recent government tenders for large-scale PV solar farms have given him hope.

“We do see a lot of moving projects … but to say that it will not be challenging to meet these dates and percentage, that would not be true.”

This is why EcoPeace argues a deal with Jordan could help reach targets. Bromberg, the environmentalist, said current domestic plans were “nowhere near enough to get to the 30% target.”

He said businesses interested in building the power plant in Jordan are citing production prices of just three US cents per kilowatt-hour, compared with five in Israel. “That’s the cheapest daytime electricity from any source,” he said.

EcoPeace believes that by bringing together Israel and Jordan on renewables, it will serve to boost the peace agreement. The group also envisions Israel selling Jordan water as part of future deals, although it acknowledges that the potential Israeli annexation has deeply soured the relationship.

“The tensions and issue of annexation have held up discussions,” said Bromberg. “But we are hopeful.”