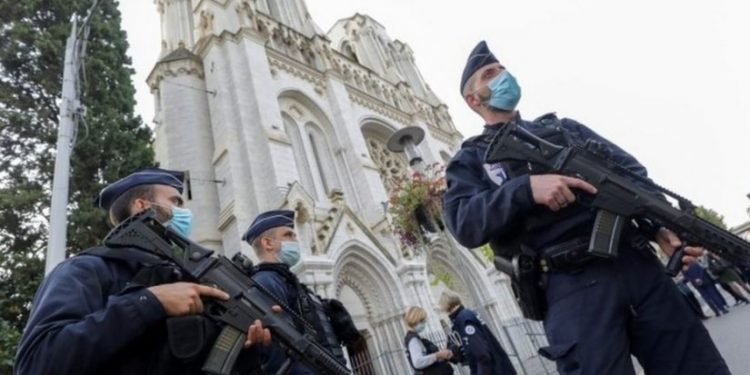 Brussels (Brussels Morning) The Islamist attacker who killed three people in Nice on Thursday is a Tunisian man who arrived in Europe only recently, BBC reported Friday. He had an Italian Red Cross document issued to him on the Italian island of Lampedusa, where he arrived by migrant boat last month.

French President Emmanuel Macron condemned the Islamist terrorist attack and noted that the number of soldiers deployed to protect public buildings will be upped from 3,000 to 7,000. France has raised its national security alert to the highest level and anti-terror prosecutors have launched an investigation.

Chief anti-terrorist prosecutor Jean-François Ricard noted that the attacker, identified by police sources as 21-year-old Brahim Aouissaoui, carried two telephones, a Koran and a 30-cm knife, with two more knives found next to a bag that he left. Speaking in Nice, President Macron said that France was under attack on its own soil for standing up for its values, adding that France would not surrender any of those values.

Ricard stressed that intelligence agencies did not have Aouissaoui on their radar as a potential threat, AP reported on Friday. He added that, according to the Italian Red Cross document, Aouissaoui arrived in Italy on September 20 and reached Paris on October 9.

Israeli Prime Minister Benjamin Netanyahu condemned the Nice attack, stressing that all civilized peoples must stand in full solidarity with France against the scourge of terrorism.

Iranian Minister of Foreign Affairs Mohammad Javad Zarif condemned the terrorist attack, called for a stop to hate speech, provocations and violence, and urged a return to reason and sanity. In a comment on Western countries asserting their right to satirize and caricature, Zarif concluded that peace cannot be achieved with ugly provocations.

Jordan’s Ministry of Foreign and Expatriate Affairs spokesman Dhaifallah Ali al-Fayez denounced the terrorist crime and pointed out that all crimes destabilize security and stability, making them inconsistent with religious and humanitarian values and principles.

All 27 EU member states condemned the attacks against the bloc’s shared values in the strongest possible terms, calling on world leaders to work together for dialogue rather than division.

Pakistan’s Minister of Foreign Affairs Shah Mahmood Qureshi condemned the attack, pointing out that Pakistan is against any such incidents and condemns violence wherever it happens.