Is Iraq willing and able to prosecute EU citizens who fought in Iraq for ISIS?

by Nafez Sami
in Features, In Depth 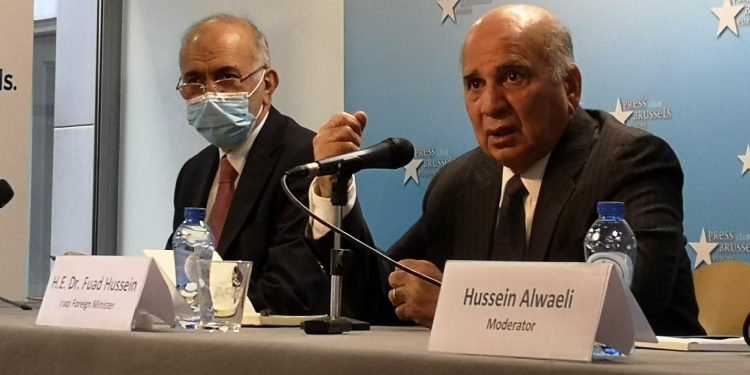 Consultations with Iraq revolve around the presence there of EU troops and the prosecution and possible repatriation of EU citizens who joined the ranks of ISIS, as well as the future of their children, minors entitled to EU citizenship for whom countries have a certain duty of care.

Borrell reiterated the EU’s firm intention to further strengthen bilateral engagement and intensify dialogue and cooperation with Iraq, mainly through the full implementation of the EU-Iraq Partnership and Cooperation Agreement. Between 2018 and 2020, the EU mobilised 480 million euros in development aid, as well as an additional 159 million euros to address the effects of the COVID-19 pandemic.

Brussels Morning had the opportunity to explore Iraq’s perspective on the most pressing questions from an EU perspective.

BM: Is the Iraqi military able to deal with ISIS and are there any talks about troop withdrawals ?

FH: Yesterday I met the NATO Secretary General and his team and we talked about the relationship between our forces and NATO. You all know that NATO’s mission in Iraq is to help and assist Iraqi forces. From 2014 through to 2017 we liaised and allied forces supported the Iraqi army in the fight against ISIS, helping us to liberate territory. So the NATO mission is still there and there is a real need to have a deep discussion about our future relationship; I am glad to say that we have reached a good understanding and we will continue these discussions in Baghdad. Of course, NATO can play an important role in training and advising the Iraqi forces and that is what we have agreed about. And NATO’s decision is to continue with its mission in Iraq.

BM: Is the Iraqi government able and willing to prosecute EU citizens that fought in Iraq in the ranks of ISIS?

FH: We are in fact in dialogue with the European countries about how to deal with these terrorists who are European citizens. I am talking about those who are in camps or in prison in Iraq. We are negotiating with various countries because these terrorists acted within Iraq and many of their victims have the right to confront them and we should have the right to deal with them.

At the same time, they are citizens of these countries, some of which are ready to repatriate them. There are many legal challenges in that respect: related to their acts, their identification, the fact that they are married and have children, the fact that we need to address the needs of these children. Sometimes you have a woman from Belgium or France and she is married to a foreign national, they have a family, and now they are in prison.

So, dealing with these people and their children presents a multitude of legal issues.

Some of them were members of ISIS in Syria and were captured in Iraq. Their crimes were committed mostly in Syria although some of them also acted in Europe and Iraq. So, these issues are on the table and we are consulting with our European partners to address them.

If they remain in prison, then who is going to deal with them legally? Is it the country of origin or Iraq? We are talking about 70,000 of these terrorists, some of whom are in Syrian camps, of whom 1000 are Iraqis and the rest are foreigners. As I said we are consulting with all the countries concerned but it’s an issue with a complicated legal basis.