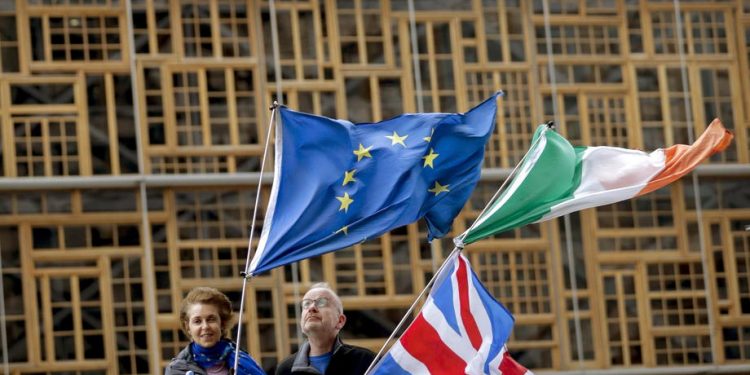 London (Brussels Morning) Ireland will be the biggest loser in the Eurozone after Britain officially leaves the EU on 1 January 2021, said the Irish Central Bank’s governor Gabriel Makhlouf, speaking to the Financial Times.

As progress is still to be made towards a trade deal between Britain and the EU, the bank has anticipated the worst-case scenario of no-deal after the transition period ends, which he said would be a “double whammy” for the economy:

“There is a whammy from the pandemic that is hitting particular sectors hard and then we have the added whammy of Brexit and, if there is no deal, that’s a particularly big whammy”.

The impact would be most strongly felt on Ireland’s agricultural and food sectors, shaving a forecasted 2 percent off the country’s economic growth next year, he noted.

Makhlouf said the situation would be a lose-lose for everyone.

He also predicted financial services to shift more prominently to other European centres. The City of London is known as one of the world’s biggest financial hubs, second only to New York.

“I have found it fascinating how little debate there has been in the UK about the fact that this deal that is being negotiated doesn’t include financial services”, he added, stressing it was an important part of the UK economy, employing and paying lots of people and taxes.

The pandemic has had a gruelling effect on Britain’s economy, with debt exceeding GDP and further restrictions and rising unemployment expected to push down further on consumer spending.

Ireland will be the first European country to impose another national shutdown as the number of positive coronavirus cases rises. Under the new measures, which will last six weeks, nonessential retail businesses will close and residents must stay within about three miles of their homes except for work or essential journeys.

It will mean an estimated 150,000 people could lose their job for a “preemptive strike against the virus”, according to deputy minister Leo Varadkar.

Makhlouf said that the six-week lockdown is expected to occur quite regularly, “the fourth quarter is going to be negative”, he said.

A no-deal Brexit could mean Irish exports to the UK are slapped with up to €1.5 billion of tariffs.

There is also the even more contentious issue of a no-deal’s impact on the Irish border, Makhlouf noted, which could jeopardise its peace accord with Northern Ireland.

Brexit talks resume this week, with both parties reportedly determined to move closer to an agreement.