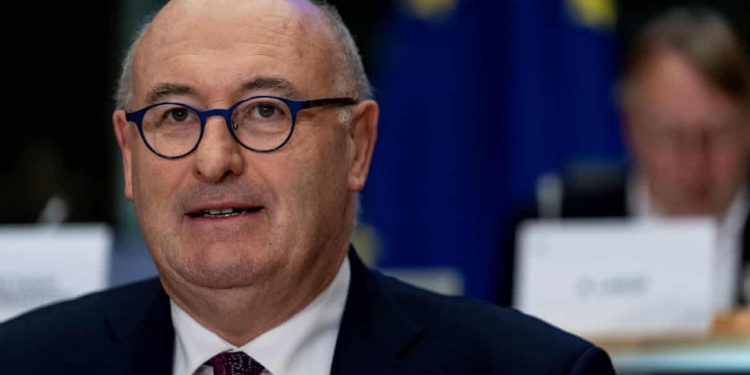 Ireland’s taoiseach, Micheál Martin, has asked the EU trade commissioner, Phil Hogan, to consider his position after revelations that Hogan attended a parliamentary golfing event in breach of coronavirus guidelines.

Martin and the deputy prime minister, Leo Varadkar – the head of Fine Gael, the party for which Hogan previously served as a lawmaker – spoke to Hogan on Saturday and “asked him to consider his position”, a government spokesman said.

Hogan was named by the Irish Examiner newspaper as one of the 82 people who attended a parliament golf society dinner on Wednesday night.

The event was held 24 hours after the government announced fresh Covid-19 restrictions – including no “formal or informal events or parties” to be held at hotel restaurants – to curb a surge in cases.

It was reported that guests sat at tables of 10, in breach of coronavirus guidelines, and that organisers erected a room divider in an attempt to skirt legislation banning gatherings of more than 50.

Police on Friday said they had opened an investigation into the event for alleged breaches of that legislation.

Ireland’s agriculture minister, Dara Calleary, and deputy chair of parliament’s upper chamber, Jerry Buttimer, both resigned their roles on Friday in the wake of their attendance at the event.

Hogan initially said he had been assured the dinner – attended by several lawmakers, a supreme court judge and the Moroccan ambassador – would comply with government guidelines. He later issued a statement apologising for “the distress caused by his participation”, according to state broadcaster RTÉ.

A spokesman for Martin said: “The commissioner’s apology came late and … he still needs to give a full account and explanations of his actions.”

Martin and Varadkar “both believe that the event should never have been held”, he added.

Calls were growing on Saturday for the Irish parliament to be recalled next week to deal with the fallout from the affair.

Alan Kelly, the leader of Ireland’s Labour party, said: “There are too many serious issues to be discussed, and we must restore the confidence of the public.”