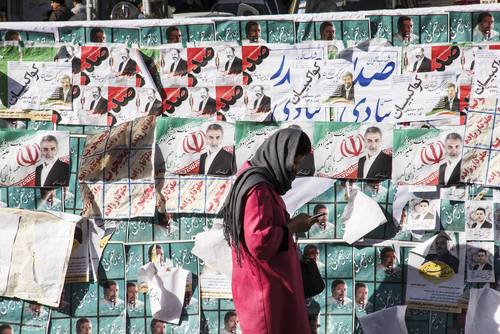 Paris (Brussels Morning) Iran’s complex political system combines elements of a modern Islamic theocracy with democracy. Power is practiced by a network of elected and appointed institutions in a system with no distinct limits, where the Supreme Leader has the most sway and the president has limited constitutional powers as head of the government.

The government’s overall strategy is determined by the Supreme National Security Council, which the president presides over but does not control. The Supreme Leader has the final say on decision-making, while the Islamic Revolution Guards Corps (IRGC) has an “outsize influence”, as Foreign Minister Javad Zarif put it recently, also limiting the president’s powers.

Outgoing President Hassan Rouhani is at the end of his second consecutive mandate, thus barred from running for a third. Only seven out of approximately 600 registered candidates were cleared to run by the Guardian Council, a 12-member body partly directly and indirectly chosen by Khamenei, responsible for vetting the presidential hopefuls. Three of those approved candidates then dropped out of the race on 16 June, in a tactic not unknown in Iran, to allow for similar candidates to gain more votes.

The council rejected several high-profile officials, including all reformists and moderates close to Rouhani, as well as former President Mahmoud Ahmadinejad and reformist Speaker Ali Larijani. Although women are not explicitly barred from running, the council has never cleared a female candidate. Religious minorities such as Sunni Muslims, Christians, Jews, and Baha’is are excluded too, due to the requirement that the president to be a Shiite Muslim.

Today’s ballot, the eighth presidential election since the 1979 Islamic Revolution, will likely be limited both on turnout numbers and in terms of potential surprises over the result. In fact, a massive abstention is expected with the Iranian Students Polling Agency (ISPA) predicting that only 35-43% of the 59 million voters will turn out to vote. Last year’s parliamentary elections had the lowest turnout in Iran’s history, at 42 percent, a record low that could be beaten. Although elections in Iran are neither free nor fair by international standards, Iran’s leaders still need a high turnout to claim the legitimacy of the political system, BBC Persian notes, which has largely suffered in the events of the past four years.

The public apathy and growing discontent with the regime is mainly linked to a crippling economic crisis under US sanctions, the COVID-19 pandemic which caused the highest death toll in the Middle East, and the growing regime repression, especially since the 2019 protests. Adding to the electorate’s disillusionment is the limited candidate options, making it rather a “selection and not an election” and the feeling that whatever they vote for, the regime will end up imposing its own preferred figure. The Guardian Council’s vetting of the candidates has come under intense criticism, even by officials close to the regime, such as Hassan Khomeini, grandson of Ayatollah Khomeini or twice past president Ahmadinejad, who are now joining disillusioned voters in calling for a boycott of an election-parody that will most certainly be won by Khamenei’s protégé, Chief Justice Ebrahim Raisi.

A frontrunner with a dark record

Raisi is a hardline cleric who lost against Rouhani in 2017. He is notorious for his involvement as prosecutor in a 1988 panel that sentenced thousands of dissidents, militants, and others to death after the Iran-Iraq War. He is not a member of the IRGC but has close ties to paramilitary groups, making it easy for the regime to keep him checked internally. Though he said that he’d respect the JCPOA and the current negotiations held in Vienna for a return to the nuclear deal, his extreme positions could make him a liability for Iran abroad. Raisi has adopted a more pronounced nationalist discourse than his predecessor and based his campaign on populist positions such as fighting poverty and corruption, but as several observers point out his “political career is paved with bodies”. Since being appointed Chief Justice, crackdown against dissent, activists and social media has taken an even more repressive turn, peaking with the 2019 mass demonstrations where thousands of protesters were arrested and hundreds executed without a fair trial, according to Amnesty International.

He is also believed to be supported for the presidency ahead of succeeding Khamenei himself, Supreme Leader since 1989 and reportedly in poor health. Iran Project Director at International Crisis Group Ali Vaez suggests that Khamenei may be considering a transformation of the political system, from a presidential to a parliamentary one, or even the replacement of the Supreme Leader position by a multiperson council, which would allow his own son to retain some influence. For Holy Dagres, senior fellow at the Atlantic Council, Khamenei’s strategy is to install a conservative president who “would secure his vision of all three government branches being led by hardliners”.  Other observers point to the opposite: by exposing him to internal crises and international negotiations, Khamenei seeks to weaken a potential threat to his own family’s influence once he is gone.

Who are the other candidates?

Abdolnaser Hemmati has served as governor of the Central Bank of Iran since 2018 and was vice president of the state-owned Islamic Republic of Iran Broadcasting, the country’s biggest media corporation. He is the only moderate technocrat to stand and has faced the sharp devaluation of Iran’s currency, the US sanctions on the country’s banking sector, an unstable stock exchange and Iran’s lucrative cryptocurrency market, BBC Monitoring notes. Hemmati is seen as the least bad option thanks to a comparatively progressive platform and approach to gender issues. In the last televised debate, Hemmati showed off his familiarity with the country’s youth and their musical preferences of rap and K-pop, but he is unlikely to dislodge Raisi as front-runner.

Amir-Hossein Ghazizadeh Hashemi, is an ENT consultant surgeon and hardline MP for the Mashhad constituency, and served as first deputy speaker of parliament since 2020. At 50, he is the youngest candidate of this election but also lacks internal reputation and prestige.

Mohsen Rezaei is a former IRGC commander-in-chief who led the IRGC in the 1980-1988 Iran-Iraq war. He has run for president three other times, gaining him the nickname “perennial candidate”, as he also failed to be elected to parliament in 2000. He’s wanted by Argentina on an Interpol “Red Notice” over his alleged involvement in the 1994 bombing of a Jewish community centre in Buenos Aires that killed 85 people, the Associated Press reports.