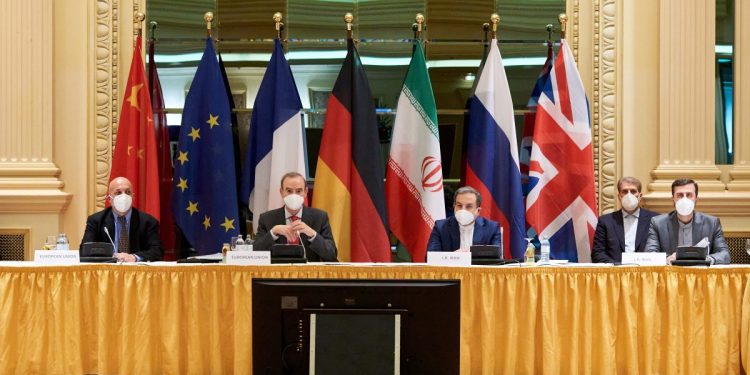 Brussels (Brussels Morning) Iran’s Supreme Leader Ayatollah Ali Khamenei criticised the US on Wednesday, denouncing Washington as being “stubborn” in the ongoing talks about reviving the lapsed Iran nuclear treaty.

Khamenei’s criticism comes as the nuclear talks in Vienna have stalled, paused at Iran’s behest while the new administration of president-elect Ebrahim Raisi is settling in, awaiting the handover from outgoing President Hassan Rouhani, the moderate who negotiated and supported the 2015 nuclear treaty.

The treaty, called the Joint Comprehensive Plan of Action (JCPOA), provided Iran with relief from international sanctions in exchange for setting enforceable limits on the country’s nuclear programme, that in essence ensured that Tehran could not develop nuclear weapons.

Hailed as a great diplomatic success for Rouhani and former US President Barack Obama, the treaty became redundant when former President Donald Trump unilaterally withdrew the US from the deal, imposing fresh sanctions on Iran. Tehran responded with an escalating series of breaches of the treaty’s provisions, hoping that in doing so it would pressure the other treaty signatories into persuading Washington to return to the deal.

As President Joe Biden’s administration came to power, Washington and Tehran resumed talks indirectly, discussing the terms for a revival of the treaty in Vienna with European signatories – the EU, France, Germany and the UK – acting as intermediaries in the negotiations.

Despite Rouhani’s interest in reviving the deal, Supreme Leader Khamenei appeared to be pushing for a more adversarial relationship with the US, a policy which is likely to become entrenched with Khamenei’s protege, the ultra-conservative cleric Raisi coming to power.

On Wednesday, Khamenei indirectly criticised Rouhani, saying “others should use his experiences” in dealing with the US. “This experience is a distrust of the West”, Khamenei observed, while he stressed how Rouhani’s government had shown “that trust in the West does not work”.

Khamenei blasted Washington for being “stubborn”, insisting that any return to the nuclear deal must include a clause to open negotiations on other issues. “They want to provide an excuse for their further interventions”, he declared. According to the Ayatollah, were Iran to refuse to discuss its missile programme and regional issues, the US would claim it had breached the agreement and effectively end it.