Iran’s Guardian Council bars most moderates from running for president 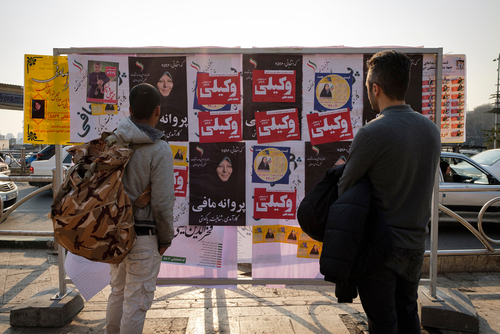 Tehran / Iran - Feb 18 2020: Islamic Republic Of Iran's parliamentary candidates of 2020 election. There are no political parties, only a limited range of politicians' orientation are accepted to join

Rouhani is unable to run again having served two full terms. However, the candidates selected by the Guardian Council indicate that the country’s Supreme Leader Ayatollah Ali Khamenei is looking for a more hardline politician as Rouhani’s replacement.

A moderate, Rouhani was credited with sealing the Iran nuclear treaty – the Joint Comprehensive Plan of Action (JCPOA) – in 2015, which freed the country from economic sanctions and allowed its economy to start recovering. However, once former US President Donald Trump pulled the country from the treaty and reintroduced sanctions against Tehran, Rouhani’s allies became increasingly sidelined.

One such was former parliament Speaker Ali Larijani, who allied with Rouhani in recent years, presenting himself as a pragmatic candidate, willing to back the JCPOA, currently being renegotiated in talks with other world powers in Vienna. However, the Guardian Council refused to clear Larijani as an election candidate. The Council also barred former President Mahmoud Ahmadinejad from running again, as well as Rouhani’s reformist senior vice president Eshaw Jahangiri.

Among the seven named candidates, the country’s current head of judiciary, hardline cleric Ebrahim Raisi, is being presented by the state television as the front runner. The hardliner, linked to the mass executions in 1988, is believed to be a favourite of Khamenei.

Raisi is in charge of a justice system that has been a target of constant criticism from both global watchdogs and western diplomats, given the country’s record for having one of the highest death penalty conviction rates as well as its notoriety for incarcerating dual nationals on  dubious charges in order to use them as bargaining chips.