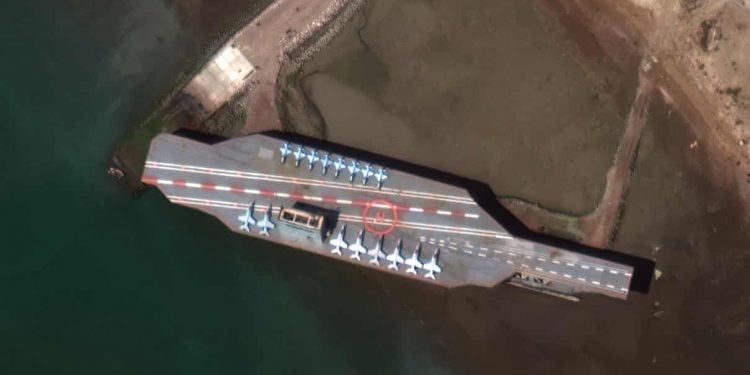 Iran’s Revolutionary Guards have fired a missile from a helicopter targeting a replica aircraft carrier in the strategic Strait of Hormuz, in an exercise aimed at threatening the US amid tensions between Tehran and Washington.

The drill, in a waterway through which 20% of all traded oil passes, underlines the lingering threat of military conflict between Iran and the US after last summer saw a series of incidents targeting oil tankers in the region. In January, a US drone strike killed a top Iranian general in Baghdad and Tehran responded by firing ballistic missiles targeting American forces in Iraq.

While the coronavirus pandemic has engulfed both Iran and the US, there have been signs of a confrontation as America argues to extend a UN weapons embargo on Tehran due to expire in October. A recent incident over Syria involving an American jet fighter approaching an Iranian passenger plane has also renewed tensions.

In the footage aired on Tuesday, Iranian commandos fast-roped down from a helicopter on to the replica and fast boats encircled the mock-up.

The Guards will use “long-range ballistic missiles with the ability to hit far-reaching aggressor floating targets” during the drill, said Abbas Nilforoushan, the Guards’ deputy commander for operations, according to sepahnews.com. In a similar exercise in 2015, the Guards mock-sunk a replica US warship.

“Our policies to protect the vital interests of the dear nation of Iran are defensive, in the sense that we will not invade any country from the beginning, but we are completely aggressive in tactics and operations,” Gen Hossein Salami was quoted as saying.

State TV footage also showed scuba forces underwater, followed by a cutaway to a blast hole just above the waterline on the replica carrier.

That appeared to be a not-so-subtle reminder of US accusations last year that Iran planted limpet mines on passing oil tankers near the strait, which exploded on the vessels in the same area. Iran has repeatedly denied the actions, though footage captured by the American military showed the Revolutionary Guards removing an unexploded mine from one vessel.

The replica used in the drill resembles the Nimitz-class carriers that the US Navy routinely sails into the Persian Gulf from the Strait of Hormuz, the narrow mouth of the waterway. The USS Nimitz, the namesake of the class, just entered Mideast waters late last week from the Indian Ocean.

It remains unclear when or if the Nimitz will pass through the Strait of Hormuz or not during its time in the Mideast.

To Iran, which shares the strait with Oman, the American naval presence is akin to Iranian forces sailing into the Gulf of Mexico near the coast of Florida. But the US Navy argues the strait is an international waterway crucial to global shipping and energy supplies.

Cmdr Rebecca Rebarich, a spokeswoman for the US Navy’s Bahrain-based 5th Fleet that patrols the Mideast, said officials were aware of the Iranian exercise.

“While we are always watchful of this type of irresponsible and reckless behaviour by Iran in the vicinity of busy international waterways, this exercise has not disrupted coalition operations in the area nor had any impacts to the free flow of commerce in the Strait of Hormuz and surrounding waters,” she added.