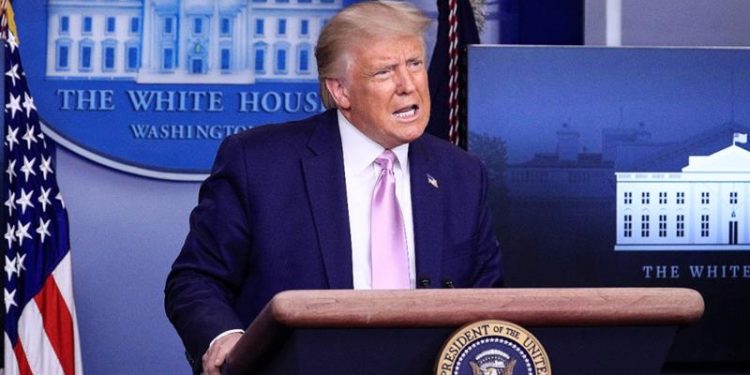 President Donald Trump has announced that secretary of state Mike Pompeo will activate a controversial mechanism aimed at reimposing UN sanctions on Iran, escalating a row with European allies that has huge repercussions for the Iranian nuclear deal.

Pompeo will travel to New York on Thursday to notify the UN security council that the US is triggering the so-called “snapback” procedure, which Britain, France and Germany say it doesn’t have the right to do.

“It’s a snapback, not uncommon,” Trump told reporters, despite the contested measure having never been used before.

The move comes after the United States suffered a humiliating defeat at the security council last week when it failed to muster support for a resolution to extend a conventional arms embargo on Iran.

“Snapback” aims to restore all international sanctions against Iran that were lifted as part of the 2015 accord with Tehran that sought to prevent it from developing nuclear weapons.

But it also threatens to torpedo the historic Iran nuclear deal that the US, China, Russia, France, Britain and Germany signed with Tehran in 2015.

Trump withdrew the US from the agreement, known officially as the Joint Comprehensive Plan of Action (JCPOA), in 2018 and introduced American sanctions on Iran as part of a “maximum pressure” campaign against the Iranian regime.

Despite pulling out of the deal, America claims that, as a “participant” of the original agreement, it has the power to unilaterally reimpose UN sanctions on Iran.

A 2015 UN security council resolution ratifying the agreement negotiated by former president Barack Obama says participating states can unilaterally reinstall sanctions if Iran has failed to significantly comply with the accord.

The “snapback” procedure is supposed to lead to the re-establishment of sanctions after 30 days, without the possibility of Russia or China wielding their vetoes.

European countries on the security council contest the US’s legal argument and fear that the return of sanctions will sink the nuclear deal, which they are battling to save.

Last week, only the Dominican Republic joined the United States in backing its call to extend a conventional arms embargo on Iran that expires on 18 October.

The embargo expires under the terms of JCPOA. Although European countries had expressed concern about the 13-year embargo expiring, their main focus is on preserving the nuclear accord.

The vote highlighted how isolated the US is over Iran at the UN.

Experts say the snapback threatens to plunge the security council into crisis.

“Most of the council will reject the US argument that it retains the right to trigger snapback despite leaving the JCPOA. They will write off this process as a sham,” UN expert Richard Gowan said.

“The real winners in this process will be China and Russia, who will argue that they are defending the UN from US unilateralism, while the Europeans distance themselves from Washington,” added Gowan, who works at the International Crisis Group think-tank.

Pompeo is scheduled to meet UN chief Antonio Guterres in New York on Thursday when they will discuss Iran.