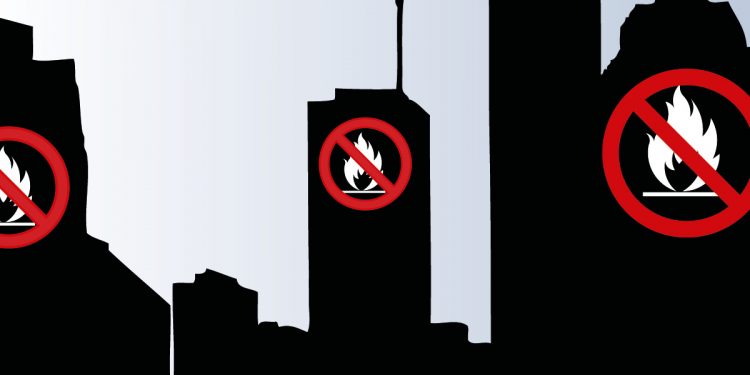 A UK investigation has revealed that thousands of apartments in high-rise buildings could be wrapped in flammable materials. New safety compliance rules have also made over a million and a half – 6 percent – of England’s homes unmortgageable, with resounding consequences for the whole property market.

The Sunday Times investigation ran over the numbers impacting the exterior of England’s apartment blocks. It reported:

It further reported leasehold owners of the flats are legally obliged to pay for repairs that can amount to £115,000 per flat.

“They’re trapped and they’ve got nowhere to go … If the property chain is broken, the whole housing market could be affected,” said Labour MP Clive Betts and housing committee chair, speaking to The Sunday Times.

One couple told the paper how they lost a £350,000 sale plus legal fees because they did not know about an exterior safety compliance requirement (in the form of an EWS1 proforma). They were left paying their mortgage plus rent in a new place because they had to move for work. “As if it wasn’t hard enough for first-time buyers, you’ve just shut down the market,” said Tom Dessain.

The EWS1 form was also found to be superfluously requested. Nigel Glenn, head of the Association of Residential Managing Agents (ARMA), said, “It’s almost as if the default is: if it’s a flat, ask for an EWS1 form”. Since Grenfell, building safety regulations are no longer held at face value. Although the Royal Institution of Chartered Surveyors, which created the new form, said that fewer mortgages would be processed without it.

Other flammable materials used include EPS, reportedly highly flammable insulation found on a building in Dijon, France, where a 2010 fire resulted in seven fatalities. Regulations on building materials vary country by country in Europe as well. In Britain, EPS has reportedly been used for 20 years.

With 186,000 high-rise flats registered with a government relief fund that has only £1 billion allocated for recladding, the money won’t cover all residents at risk as needed funds are an estimated £5.9 billion.

Work could also take 10 years to complete. The housing ministry said, “ministers and officials are in regular contact with leaseholders” and are meeting the groups this week.

The article suggested ending the crisis could take examples from the Australian state of Victoria, which has a cladding scandal, but no fatalities form fires. It also suggests rethinking mortgage requirement and says more structural fire risks should be incorporated within the support fund for apartment buildings, and that the burden should be taken off of leaseholders through legal reform.