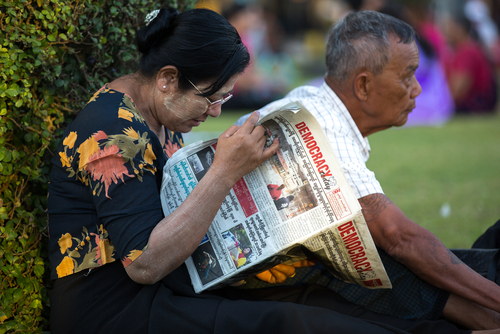 Brussels (Brussels Morning) Following the example of the US, Canada and the UK have hit military junta leaders in Myanmar with sanctions, imposing travel bans and asset freezes against the leaders, DW reports.

The anti-coup movement in Myanmar saw its first fatality as a protester shot by authorities died in hospital on Friday. The 20-year-old woman, Mya Thwate Thwate Khaing, is the first confirmed fatality in nationwide protests that started earlier this month.

The situation in Myanmar is escalating as protests and the crackdown on protesters continue and junta leaders are slapped with international sanctions. Manny Maung of Human Rights Watch (HRW) confirmed the death of the protester, stressing that she was shot in the back of the head at an anti-coup protest.

Noting that “we will look for justice and move forward”, an unnamed doctor said noted the hospital would retain the medical records while copies would be sent to the relevant authorities.

Protests against the junta continue

Tens of thousands of protesters attended the rally against the junta in Yangon on Friday, according to local media reports.

Poppy McPherson, a Reuters journalist, reported that security forces have been threatening journalists and had dispersed a group of protesters in the northernmost state of Kachin.

The internet blackout continues, with access cut back from 1 a.m. to approximately 9 a.m.

At least 520 people have been arrested thus far, the Assistance Association for Political Prisoners claimed. Twelve Ministry of Foreign Affairs officials who took part in the anti-coup movement were detained on Thursday.

For the most part, protesters welcome international sanctions against the junta leaders and are looking to the international community to apply even more pressure.

Activist Thinzar Shunlei Yi called on more countries to slap junta leaders with sanctions, adding that “we will be waiting for EU sanctions announcement on the 22nd.”

RW head Kenneth Roth said sanctions should target “the businesses that the military owns and that it uses to finance the coup and its repression,” noting pointedly that “the junta will listen to their pocketbooks.”