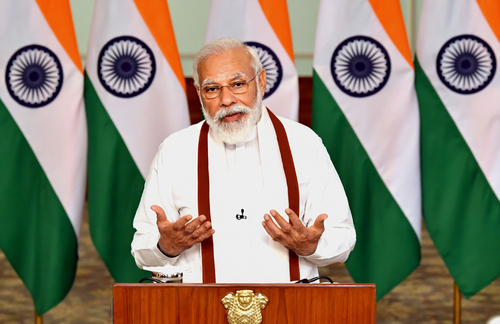 Modi visited Paris on Wednesday, as Macron hoped to offer India “solutions” for India’s dependency on Russian weapons and energy, with the president’s office stating ahead of the visit that Paris wants to “help the Indians diversify their supply”.

India has long relied on a balancing act between the west and Russia, importing most of its military hardware from Russia. India has so far seen Moscow as an ally in its conflicts with China and Pakistan, with the latter importing most of its weapons from the US and EU countries. This strategic reliance on Moscow has also prompted India to refuse to denounce Russia’s invasion of Ukraine, or vote against Moscow in United Nations resolutions, opting instead to remain neutral.

“France and India expressed their deep concern over the humanitarian crisis and the ongoing conflict in Ukraine,” said Modi and Macron in a joint statement after their working dinner on Wednesday. “Both countries unequivocally condemned the fact that civilians have been killed in Ukraine, and called for an immediate cessation of hostilities in order for the two sides to come together to promote dialogue and diplomacy, and to put an immediate end to the suffering of the people.”

France also proceeded to condemn the Russian forces’ “illegal and unjustified aggression against Ukraine,” while India refused to go as far in its statement. The two countries agreed to respond “in a coordinated and multilateral way” to the potential global food shortage that could emerge as one of the consequences of the conflict in Ukraine.