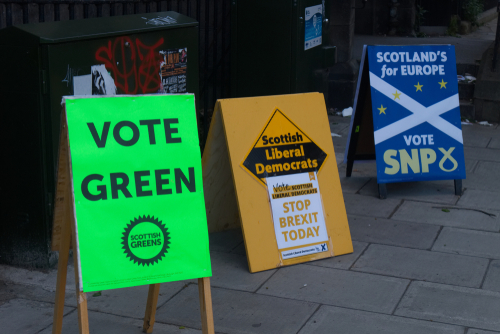 Brussels (Brussels Morning) As voters cast their ballots in Scotland’s local elections today, polls indicate the final result will be too close to call before the official tally is complete, Reuters reports.

First Minister Nicola Sturgeon’s Scottish National Party (SNP) was set to emerge as a relative winner in the elections, but the most recent polls projected the party would fall six seats short of winning an outright majority.

Sturgeon and her party campaigned on a platform demanding a new independence referendum for Scotland, noting that the UK departed the EU despite the majority of Scottish voters wanting to stay in the bloc. Scottish fears of ending up outside the EU figured heavily in determining the outcome of the 2014 referendum, when 55% of Scots voted to remain in the UK.

SNP counted on winning an outright majority in today’s elections as a means of gaining legitimacy for its renewed push for independence. UK Prime Minister Boris Johnson already stated that he would not grant Scotland another referendum, saying the last one was a “once in a generation” event.

Should SNP win the election, Johnson will be faced with a difficult choice – to either grant another referendum and risk breaking up the United Kingdom, or to refuse and further fuel Scottish discontent with his government, which a majority of Scottish citizens believe is not serving them well.

Even if SNP does not win the election, the polls indicate that the Scottish Greens are likely to gain seats in the Holyrood assembly, meaning they could possibly back the SNP’s push for independence. The Greens have previously cooperated with the SNP in passing legislation and have declared themselves to be pro-independence. This means that almost certainly the Scottish parliament will have an absolute majority of pro-independence parties.