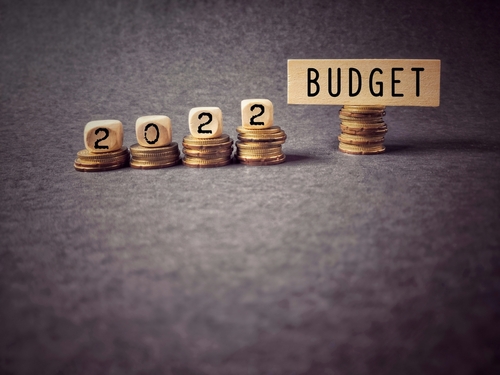 Text 2022 budget on blocks concept with coins in vintage background.

It warned that rising inflation now presents “clear and present danger” for many economies and added that the war in Ukraine is expected to drive it up further.

Slower-than-expected growth in China caused by new COVID-19 lockdowns also presents risk to the global outlook, the IMF added, as do rising prices that could trigger unrest in developing countries.

The global financial institution lowered its forecast for EU’s growth this year by 1.1 percentage points, stressing that the bloc is highly dependent on energy imports from Russia.

It predicted that Ukraine’s GDP will drop roughly 35% this year and Russia’s about 8.5%, adding that additional Western sanctions could double Russia’s GDP decline by 2023.

The conflict in Ukraine has exacerbated inflation, the global lender pointed out and added that new restrictions in China would likely create new bottlenecks and disrupt global supply chains.

It warned that reduced supplies of maize and wheat, of which Ukraine and Russia are large producers, have driven up prices, which will affect low-income households in many countries.

Pierre-Olivier Gourinchas, IMF chief economist, noted that central banks are starting to tighten their monetary policies to rein in inflation, but stressed that effects of the war in Ukraine are amplifying pressures.

He warned that the war increases the risk of fragmentation of the global economy into blocs with different reserve currencies, payment systems and technology standards, stressing that a move in that direction would be a “disaster.”

The IMF concluded that inflation is expected to stay higher for longer, warning that it could get worse if imbalances between supply and demand deepened.