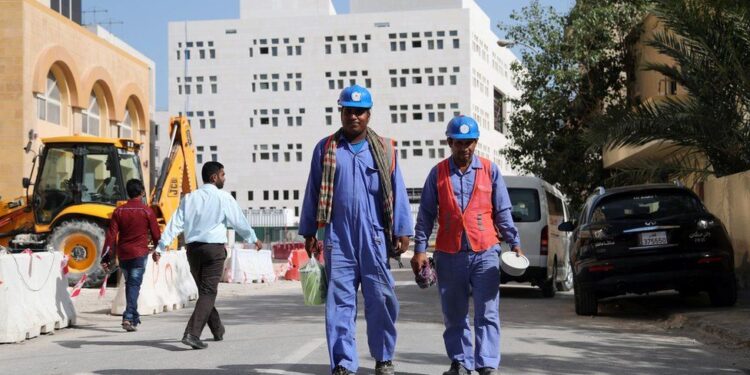 Qatar (Brussels Morning Newspaper) – Qatar migrant Reforms have improved the working and living conditions for thousands of workers working in Qatar. ILO has revealed in a new report that new reforms have been made for the ease of the workers.

Qatar has made progress and has made some labor reforms. However, some challenges in their implementation remain, but the International Labour Organization (ILO) released a new report 19 days before the start of the World Cup.

Reforms Have Improved The Working Conditions Of The Migrant Workers

The report published by ILO released a new report on Tuesday about the progress made since technical cooperation. The United Nations labor agency and the Qatari government started progressing in April 2018.

It said that reforms have improved and it has led to better working and living conditions for hundreds of workers. Some additional efforts are needed to make sure that the workers can benefit.

“We’ve been on a long journey with Qatar – and the reforms and the cooperation with the international community are indeed significant for the region,” Ruba Jaradat, ILO regional director for the Arab States, said in a statement.

“We all recognize that we are not yet at the finish line, and we will build on this solid foundation to address the gaps in implementation, and ensure that all workers and employers can fully benefit from these major reforms.”

Qatar Is Under Spotlight For The Treatment Of Migrant Workers

The Gulf state did not allow the workers to change their job without the employer’s permission. In August 2020, Qatar has announced that a lot of changes to the labor law have been made. The changes included scrapping the need for a no-objection certificate (NOC) which has been replaced with change employment.

The announcement was made a few months before and a series of labor reforms have become a part of the process before the World Cup. The ILO, in the report, added that Qatar’s labor ministry has approved the applications of about 350,000 applications made by migrant workers. The applications contained requests of allowing them to change jobs easily.

The report added that some workers are still facing hurdles in leaving jobs and moving to new ones. In March last year, Qatar has become the first country in the Gulf that has adopted a minimum wage that will apply to all workers.

ILO said 280,000 people have earned the chance to get a salary to rise to the new minimum threshold. The salaries have been termed inadequate by workers and rights groups but there are some new legislation was introduced.

“But it soon became clear to us that the campaign continues, expands and includes fabrication and double standards, until it reached a level of ferocity that made many questions, unfortunately, about the real reasons and motives behind this campaign.”