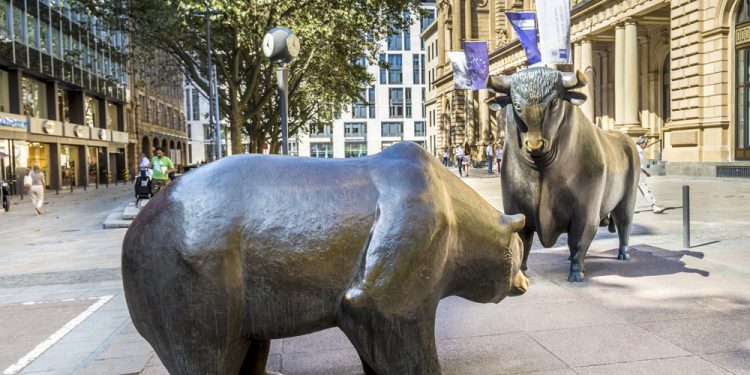 The Bull and Bear Statues at the Frankfurt Stock Exchange, Germany. Frankfurt Exchange is the 12th largest exchange by market capitalization.

Brussels (Brussels Morning) The Ifo Institute for Economic Research has predicted that the German economy will contract in the final quarter this year.

Business morale in Germany, it noted, had dipped yet again this month, marking November as the second consecutive month of decline, according to Reuters reporting yesterday, Tuesday.

Ifo singled out the fact that the German authorities had imposed new restrictions to cope with the second wave of coronavirus infections, and that these measures were expected to affect economic recovery.

As for the business climate index, Ifo noted it dropped from 92.5 in October to 90.7 in November, the second month in a row that the index fell back, after five consecutive months of growth.

The outlook of businesses on the current situation has worsened since October. However, the drop in business morale is being attributed to the significantly more pessimistic expectations for the coming six months.

Much of the hospitality sector in Germany has been ordered to close at the start of the month, with Chancellor Angela Merkel and local authorities expected to extend the restrictions until December 20.

Ifo head Clemens Fuest warned that business uncertainty was on the rise as the second wave of infections interrupted economic recovery in Germany.

The institute’s economist Klaus Wohlrabe pointed out the survey indicates the German GDP will drop in the fourth quarter due to contraction in the services sector. At the same time, lockdowns in other countries are expected to affect manufacturers focused on export.

Following GDP decline of 9.8% in spring, caused by restrictions imposed with the aim of curbing the spread of coronavirus, German GDP recovered by 8.5% in the third quarter.

The Ifo report is in line with the results of a survey of purchasing managers released earlier this week that showed private sector growth slowing in November due to the new restrictions.

On Wednesday last week, German federal and state officials intimated that the partial lockdown introduced on 2 November would be extended until late December, AP reported Tuesday.

While authorities hoped vaccinations would start early in 2021, most likely it will take months before all restrictions are lifted. Officials also expressed their hopes that the financial and economic damage caused by pandemic control  restrictions will prove manageable.