‘I want to stand up to Trump’: Portland protesters unleash fury over BLM, Covid-19 and economy 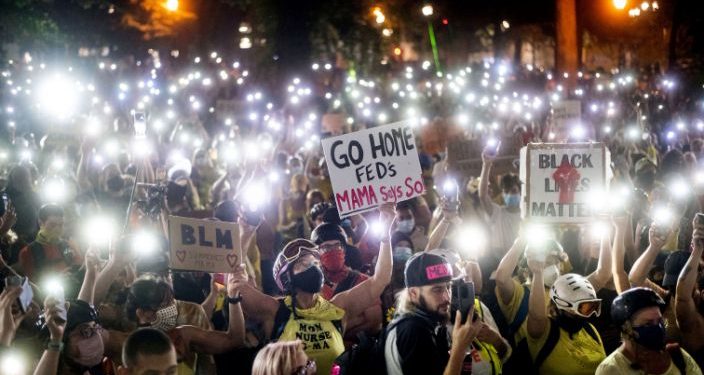 Some come early and leave before the atmosphere turns and the trouble begins. Others sit out the peaceful demonstration and arrive in time for the nightly showdown to the beat of drummers rallying Portland’s ad hoc force of protesters against “Trump’s troops”.

But each evening follows the same broad ritual in downtown Portland in support of Black Lives Matter and against Donald Trump’s deployment of federal paramilitaries even as the protests have swelled to draw in organized groups of mothers, military veterans and first time demonstrators pushed too far by the president.

The peaceful protest against racial injustice that gets going around dusk typically evolves toward midnight into a staged confrontation with officers from the border patrol, US Marshals Service and other agencies deployed for the unusual task of facing down popular anger on American streets.

Each side accuses the other of provoking the fight, and therefore both claim to be defending themselves.

Television pictures of the skirmishes – the federal forces in camouflage firing waves of teargas and baton rounds, and looking very much like military invaders; the demonstrators in gas masks and helmets, some with large homemade shields, more resembling an insurgency – are open to interpretation.

Fox News selectively presents them as evidence Portland is a “war zone” in which the protesters arsenal includes flares, fireworks and lasers aimed at the federal officers eyes. Some protesters use the language of war too, describing tear gas as “chemical warfare”, the federal agents as an “occupying army” and quoting the Geneva conventions in accusing the authorities of war crimes for shooting demonstrators in the head with baton rounds.

But the theatre of the intense staged street battles is actually confined to a few square blocks of downtown Portland and obscures the growth of the protests from the issue of racial justice and the federal intervention’s unleashing of anger over four years of Trump’s rule.

The flashpoint was the sight of the federal paramilitaries without identification abducting protesters in unmarked vans and the violence meted out by officers against a US navy veteran who was demonstrating peacefully.

But the demonstrations have now become a focal point of anger at a president indifferent to the coronavirus death toll, tens of millions driven into unemployment, and an environmental emergency. There is also growing fear that America’s democracy is under threat.

Jean McNeil, a machinist, travelled from neighboring Washington state to join the demonstration outside the Portland courthouse where the federal paramilitaries are based.

“Honestly, I support Black Lives Matters but that’s not what got me here. I wanted to stand up to Trump. It feels to me like that’s what it’s really about for a lot of people here. We’re sick of this man and the damage he’s done, and this is the moment to stand up for our democracy because Trump is going to do everything he can between now and November to steal the election,” he said.

Lydia, a Teamsters union organizer who, like many protesters fearful of arrest, chose to give only her first name, agreed.

“People are out here for multiple reasons in addition to sending a message about Black Lives Matter. It’s about making sure that we have protected our right to protest and engage in free speech. It’s anger at Trump and his presidency and how much it’s really eroded our environmental protections, protections on the job for people, the economy is tanked,” she said.

Democratic political leaders in Oregon have accused Trump of politicizing the use of federal forces to provoke conflict in order to portray himself as a law and order president. Trump has said he will send thousands more officers into other cities, such as Chicago to combat gun violence, in a move widely interpreted as an attempt to stir unrest across the country as a distraction from his failure to address the pandemic and its economic consequences.

If so, the president is unlikely to be displeased that his intervention in Portland has reinvigorated the protests and escalated the confrontation between demonstrators and federal officers.

With neither side ready to back down, and the Trump administration preparing to send dozens more officers to Portland, there is growing concern that the nightly battles are playing into the president’s hands.

The head of the Portland branch of the National Association for the Advancement of Colored People , E D Mondainé, said he feared BLM in the city was being coopted by “privileged white people” and that “empty battles” were serving the agenda of a president baiting protesters to light the fuse on a racist backlash across the country before the election.

“We cannot let teargas and rubber bullets define the moment that we’re in now,” he said.

Some of the protesters are not without their doubts. They acknowledge that Trump is exploiting the demonstrations but say his intervention cannot go unchallenged.

A US Navy veteran, who gave his name only as John, said he had not been on the demonstrations before the federal intervention but was brought out by federal officers beating a Navy veteran, Christopher David, who was protesting peacefully.

“He did nothing other than asked that question and he got beat up. I saw the video. I said, that’s enough,” he said. “If Trump utilizes federal troops against the people, and I consider myself representing the people here, that’s the beginning of the end I think of a democracy. I’m very worry about the condition of our democracy, the health of our democracy.”

Lydia, the union organizer, also acknowledged that Trump is exploiting the violence of the protests, but said it will not get him what he wants.

“ If he were really interested in sending the feds into support states, he would send them in to help provide medical care for people during a pandemic,” she said. “Instead he sends them here as a political stunt to just try to rattle the cages of his supporters who are deathly afraid of liberal or progressive ideology around a whole host of issues. This is just a scare tactic. It’s the last gasps of a losing president.”