‘I can’t give in’: The Togolese nun caring for Aids patients amid Covid-19 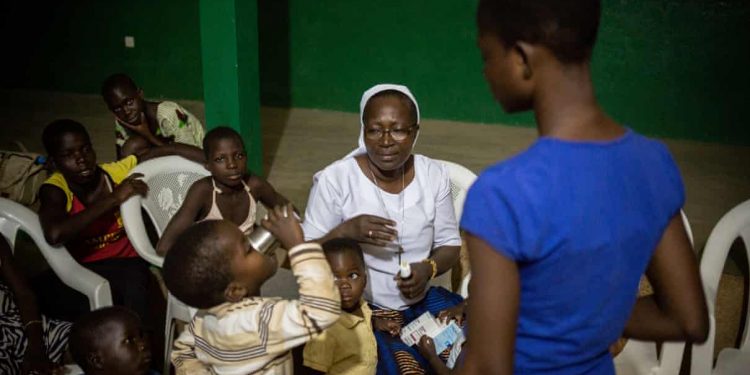 Dapaong is a buzzing, multi-religious city, 13 miles south of Togo’s border with Burkina Faso and more than 300 miles (500km) north of the capital, Lomé.

In and around the town, Marie-Stella Kouak is well-known. One of the few female community leaders, she is easily recognised by her booming laugh and the white nun’s veil on her head.

Raised in a polygamous family, Kouak is now a Catholic sister belonging to the Sister Hospitallers of the Sacred Heart of Jesus congregation. She has lived here all of her 52 years, apart from a stay in France and Belgium to attend nursing courses.

It was when she was in Europe in the 1990s that she received a call from her sister informing her that her brother was HIV-positive: “I got permission to travel to Togo. That was a devastating experience. My brother, who weighs 105kg, was 35kg. Family members were divided and scared to visit him as if it was a contagious disease.”

Back at the nursing school, she began doubting whether she could handle more tragedies when returning home. “I prayed and the Lord told me: ‘Why don’t you consider the suffering of your brother as a martyr, and from his [martyrdom] you give yourself to the others?’

“Then I held my [devotional] medal and I told myself that I will fight. I decided to do my diploma’s thesis on HIV/Aids assistance programmes, that’s how I started. At this time, there was nothing in Togo, while antiretroviral therapy was already available in Europe.”

Since then, Kouak has built up one of Dapaong’s most impactful non-profit organisations. In 1999, she founded Vivre dans l’Espérance (To Live in Hope) with a handful of volunteers to support people living with HIV and Aids. Soon, she started to take in Aids orphans, first in a building named after SaintAugustineand then in a bigger compound.

The NGO employs 65 people, runs a community health centre and a farm, and will soon open a primary school. In 2019, it provided health, food and psychosocial support to around 1,500 people living with HIV and Aids across Togo’s northernmost province.

When Covid-19 was declared a pandemic in March, Kouak quickly adapted. The Togolese government restricted local and regional transport, so most of her patients were unable to get to Dapaong. She step up home visits, taking food, sanitary items and antiretroviral drugs to rural communities.

By early June, having kept coronavirus cases low – 806 infections and 16 deaths were officially recorded in Togo as of Friday – the authorities lifted the state of emergency and restrictions on movement.

But Kouak still feels the severity of the crisis. “I planned to take some days off to rest but I can’t,” she says. “Since March, we have been dealing with the consequences of the pandemic and they are becoming more and more dramatic. Our patients are struggling to get food or pay for transport to access dispensaries.”

Dapaong is also hit by the continuing closure of land borders. Trade with Burkina Faso and other economic activities were halted and seasonal agricultural workers who left the country and are now urgently needed in the fields have been unable to return.

“I feel like all our good work is being erased and we are taking a 10-year leap backwards. If the borders don’t open soon, we might run out of antiretroviral drugs, which will be catastrophic,” she added.

UN agencies recently shared similar concerns, warning that disruption of HIV services in sub-Saharan Africa could lead to hundreds of thousands of extra deaths and infections.

For Kouak, this is all just another new challenge after so many others. In the first years of operation, the NGO’s accountant embezzled a huge amount of money; she went to court and had his newly built villa turned into accommodation for visitors. In 2017, when she opened the health centre, she faced death threats and violent protests from some Dapaong residents who didn’t want Aids patients in their neighbourhood. Through each crisis, Kouak has kept to her routine, waking at 4.15am for an hour of peaceful prayer before she starts her packed and often disrupted schedule.

“As a woman of faith, I cannot give in to discouragement. This is the time to invent new ways to continue our mission.”