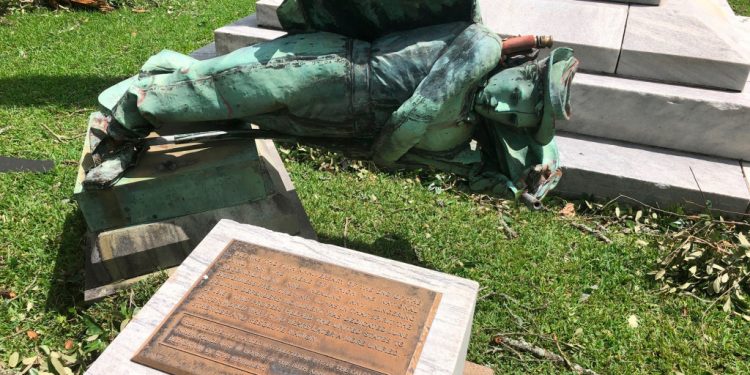 A Confederate monument in Louisiana that local officials voted to keep earlier this month was damaged by Hurricane Laura as the storm battered the Gulf Coast Thursday morning, a report said.

The statue of a Confederate general that stood atop the South’s Defenders Monument on the grounds of a courthouse in Lake Charles was blown off during the storm, the Daily Advertiser reported.

“Lake Charles and Calcasieu Parish has been filled with controversy and tension after our parish government by a vote of 10-5 refused to take down the Confederate South’s Defenders Monument,” Louisiana resident Davante Lewis wrote in a tweet with a photo of the felled monument.

“Hurricane Laura had other plans and brought it down herself,” he added.

The Calcasieu Parish Police Jury voted by 10-4 to keep the monument in a vote taken on Aug. 13, according to the Daily Advertiser.

The statue was dedicated in 1915 to soldiers from the area and surrounding states who had fought for the Confederacy in the Civil War, according to the report.

In the lead up to the vote, Parish officials received 945 letters from the public about whether or not they should move the statue off the courthouse lawn.

Of the votes tallied, 878 were against relocating the monument and 67 were in favor of moving it, according to the Daily Advertiser.