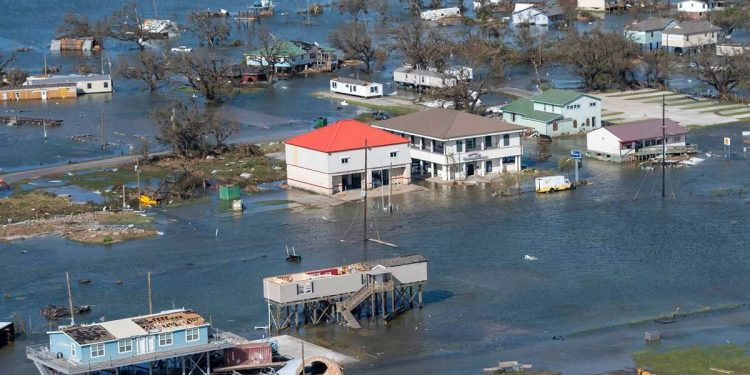 Donald Trump departed the White House on Saturday morning heading for south-west Louisiana to tour the damage there and in neighbouring Texas, two days after Hurricane Laura powered in off the Gulf of Mexico with winds up to 150mph, knocking out power and causing extensive flooding and lack of running water across several towns.

The US president, who on Friday approved Louisiana’s request for a major disaster declaration in 23 parishes, as local jurisdictions are called in the state, is expected to arrive in Lake Charles around noon local time and meet with the governor, John Bel Edwards.

In a statement, Edwards said the devastation and damage stretch all the way to northern parts of Louisiana. Trump’s action would “pave the way for getting aid to individuals and communities impacted by Hurricane Laura”, Edwards said.

The White House said on Friday that Trump would “survey storm damage and receive briefings on emergency operations and ongoing relief efforts” when he arrives.

At least 14 deaths – 10 in Louisiana and four in Texas – are now attributed to the category 4 hurricane, which packed the strongest winds of any storm on record to hit the southern shoreline and left extensive damage to homes and water systems across a swath of coastal land 40 miles wide.

On Saturday, more than 40 million Americans up the eastern seaboard as far north as Connecticut, were braced for fierce weather stirred by Laura’s tail, with winds over 60mph and torrential rain forecast.

Wind damage in Louisiana was widespread, with roofs blown off homes and windows smashed. Hundreds of thousands of people were left without power or clean water, but forecasts that the storm would inundate the state’s sixth largest city, Lake Charles, with as much as 20 feet of floodwater were not realized.

Firefighters were still battling a chemical fire at a chlorine plant near the city on Friday, a day after the blaze was temporarily extinguished.

The factory, which produces chlorine products for swimming pools, released an unknown quantity of gas, according to the Louisiana fire marshal’s office. The fire prompted an expanded shelter-in-place alert and warnings to avoid contact with chlorine gas and other harmful emissions.

Before leaving for the two affected states, Trump told reporters he had considered delaying his 70-minute speech to the Republican national convention on Thursday night because of the storm. Trump said that, as “it turned out, we got a little bit lucky. It was very big, it was very powerful, but it passed quickly.”

Meteorologists also said the monster storm could have wreaked much more destruction than it did.

Just before striking Louisiana, Laura wobbled east 15 miles – enough to move the worst of the storm surge east of Lake Charles and into Cameron parish, which is the second least-populated county along the coast.

The storm was still devastating, but not quite as catastrophic as it might have been.
”It was really, really bad instead of apocalyptic,” a Colorado State University hurricane researcher, Phil Klotzbach, said.

Jamie Rhome, a National Hurricane Center storm surge specialist, referred to the storm’s last-minute course change as the “little wobble” that saved Lake Charles. In the end, the city got maybe half the storm surge it could have received, he said.

Authorities had warned before landfall of an “unsurvivable” storm surge for a wide region.

Others said swift evacuation of the local population also contributed to the relatively light loss of life.

“I’m pretty much a cynic and a critic, but I think these parishes did wonderfully,” said
Shirley Laska, a sociologist who studied Louisiana disasters at the University of New Orleans. “And I mean both the citizens and the leaders,” Laska said. “But they got out of Dodge. They evacuated as they were told.”
Laska said she believed the months-long coronavirus pandemic helped make everyone more attentive to risk. Added to that was tropical storm Marco, which threatened the region only a few days earlier and then fizzled. People were prepared well in advance.

After an arena rally in Tulsa, Oklahoma, early this summer drew a slim crowd, campaign managers have settled on a new format: packing smaller crowds into airport hangars.

Trump, according to advisers, is also planning a series of policy speeches and is expected to continue to use the powers of his office including signing executive orders and issuing pardons to help his party political prospects, against normal protocol.