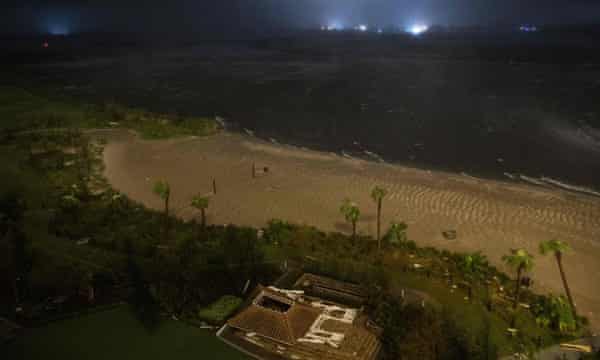 Hurricane Laura, the most powerful hurricane to strike the US this year, moved across Louisiana on a northerly path on Thursday, after threatening an “unsurvivable storm surge” on the coast and tropical force weather as far as Tennessee.

The storm slammed into western Louisiana overnight with gusts of up to 150mph and could cause “catastrophic conditions”, the National Hurricane Center (NHC) said. Not until 11 hours after landfall did it finally weaken.

On Thursday night, Donald Trump said during his speech to close out the Republican National Convention that his thoughts were with the “wonderful people who have just come through the wrath of Hurricane Laura”.

The US president said he would visit the Gulf Coast this weekend to tour the damage.

Forecasters said an eastern turn would again make the storm a looming threat, this time to the densely populated Atlantic seaboard. Trees were down and power was out as far north as Arkansas, where remnants of the storm were centered as the once fearsome Category 4 hurricane weakened to a depression after dark.

Additional damage was possible as new tornado warnings were issued on Thursday evening in Mississippi and Arkansas.

Concern was growing for people in the path of the storm in Louisiana who did not evacuate on Wednesday. Louisiana recorded six fatalities as of Thursday afternoon, including a 14-year-old girl in Vernon parish who died after a tree fell on her home, a 24-year-old man who died of carbon monoxide poisoning inside his home and a man who drowned while aboard a sinking ship.

Laura blasted through the Louisiana coast and made landfall as a Category 4 hurricane early Thursday, wreaking damage on the industrial, casino city of Lake Charles. The storm has left more than 875,000 people without power.

Authorities had ordered coastal residents to get out, but not everyone did in an area devastated by Hurricane Rita in 2005. By Thursday morning, many buildings had partially collapsed or were missing chunks. Windows were blown out, awnings ripped away and trees split in half. At the local airport, planes were overturned, some on top of each other.

Laura headed north towards Shreveport, Louisiana, on Thursday rather than west across Texas as had been one of the leading predictions, meaning the city of Houston has probably dodged a bullet, although coastal Port Arthur is threatened by storm surge flooding.

On Thursday morning it was confirmed a chemical plant outside Lake Charles had caught fire. Louisiana governor John Bel Edwards advised residents in the area to shelter in place. Footage of the BioLab plant in Westlake showed vast plumes of emissions billowing from plant.

Although authorities had urged residents in Louisiana municipalities dotted along the coastline to evacuate there were concerns that up to 150 people in Cameron parish – where the storm landed on the US mainland – had stayed in place, leading to fears of loss of life.

“We know anyone that stayed that close to the coast, we’ve got to pray for them, because looking at the storm surge, there would be little chance of survival,” Louisiana’s lieutenant governor, Billy Nungesser, told ABC’s Good Morning America.

Laura is the region’s most powerful hurricane in over a century, and ties for the fastest storm in Louisiana history. Experts warned earlier in the year that the hurricane season would be unusually active. Evidence suggests that the Atlantic hurricane season is becoming worse due to warming waters linked to the climate crisis.

In Lake Charles the fierce wind battered tall buildings, blowing out windows as debris flew around, more than 30 miles from the ocean. The highway into Lake Charles was littered with downed power lines and mobile home parks had been flattened by the high winds.

Social media footage showed torrents of rain rushing sideways past lampposts, and streets covered with water closer to the coast.

“There are some people still in town and people are calling … but there ain’t no way to get to them,” Tony Guillory, president of the Calcasieu parish police jury, said on Thursday morning over the phone as he was battened down in a Lake Charles government building that was shaking from the storm.

The centre earlier warned that an “unsurvivable storm surge with large and destructive waves will cause catastrophic damage from Sea Rim state park, Texas, to Intracoastal City, Louisiana”.

The National Hurricane Center said Laura will move across south-western Louisiana on Thursday morning, and continue northward across the state through the afternoon.

Forecasters said the storm surge could be six metres (20ft) deep and unsurvivable.