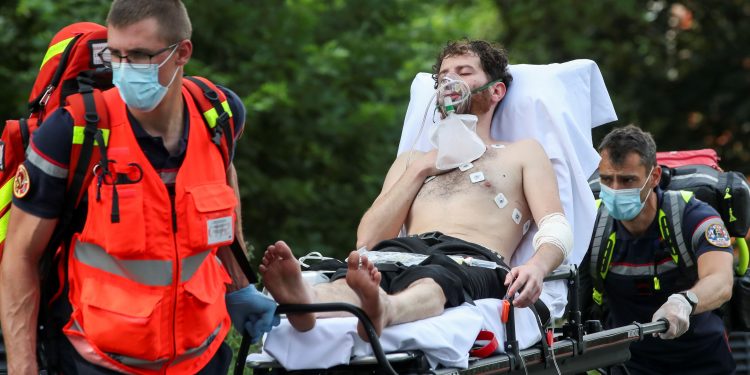 BRUSSELS (Brussels Morning) – Five hunger strikers had filed summary proceedings against State Secretary Sammy Mahdi (CD&V), because he allegedly broke promises made regarding regularisation. The judge now considers that claim to be unfounded and refers the complainants to the Council for Foreign Disputes. The former hunger strikers and accompanying non-profit organisations are now considering further actions.

In May 2021, about 475 sans-papiers went on hunger strike in the Begijnhofkerk, the ULB and the VUB. They wanted their illegal stay in Belgium to be collectively regularised. It wasn’t until July 21, when some hunger strikers were already in dire straits, that a negotiated solution emerged.

But of the 173 people who applied, only 35 have received a positive response so far. 137 people received a negative answer and one person has already left. That is not the smooth regularisation that hunger strikers had hoped for.

Broken promises, according to the hunger strikers, and they initiated summary proceedings with the help of three non-profit associations. Their demand: to put the assessment by the Immigration Service on hold in their view, according to their lawyer, until a lawsuit is brought on the merits.

That judge now judged that claim as unfounded, the litigant hunger strikers were unsuccessful. The judge ruled that residence status is a matter for the Council for Foreign Disputes, and not for the Court of First Instance, where these preliminary relief proceedings had been brought.

Mahdi said on Twitter. “No criteria have been agreed and it has always been very clearly stated that there would be no more flexible treatment. I have always promised them that I will continue to look at the files humanely. That’s how it happens. But a policy in which I am more flexible for people on hunger strikes seems to me to be anything but a humane approach.”

The four people with whom the government negotiated in the Beguinage Church claim otherwise. One of them is lawyer Alexis Deswaef, who has always claimed that promises were indeed made. The judge took into account the testimonies of these four negotiators. But that didn’t end in a verdict in their favour.

The three non-profit associations that have supported the case – l’Association pour la Défense du Droit des Étrangers (ADDE), la Coordination et Initiatives pour Réfugiés et Étrangers (CIRÉ) et la Ligue des Droits Humains (LDH) – have been unavailable for comment for the time being. It is not clear at this time whether they will take further steps. They can appeal in summary proceedings or file a case on the merits.

One of the spokesmen for the hunger strikers, Ahmed Manar, is convinced of its usefulness. “This week there will be consultations with all strikers to see how we are going to respond to this. This can range from actions to demonstrations, to procedures. We can appeal against the judge’s decision. But we can also go to the European Court of Justice. Court of Human Rights in Strasbourg,” said Manar. “But we’re definitely doing something. Promises have been broken, the evidence for that is overwhelming.”