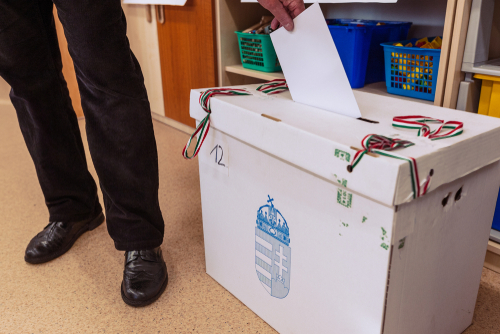 Monor, HUNGARY - April 08, 2018: The hand of man putting his vote in the ballot box. Election in Hungary.

Brussels (Brussels Morning) Hungary’s President Janos Ader has set the date for the Hungarian general election for 3 April this year, when the united opposition will attempt to unseat the far-right Prime Minister Viktor Orbán.

A former liberal, Orbán came to power in 2010 in a landslide victory. He has since moved his policies far to the right of the political spectrum, campaigning as the defender of family values and Christian culture, while his opponents criticise his homophobic and anti-immigrant policies.

Orbán himself says he has turned Hungary into an “illiberal democracy”. His refusal to comply with EU regulations on a wide range of issues — from migrant policy to minority rights — has led to his party being expelled from the European People’s Party (EPP) and its parliamentary group. He also faces a number of legal challenges from the Commission.

His opponents and rights groups claim he has stifled minority rights in the country, and tightened his grip on the media, while helping business tycoons in his inner circle get even wealthier.

Since the Hungarian electoral system favours large parties, Orbán has managed to maintain a solid grip on power through the past two elections thanks to a splintered opposition. However, the April election is likely to be a close race, with six diverse opposition parties, ranging from far-right to far-left, uniting in a coalition whose sole purpose is to unseat Orbán.

The coalition’s candidate for PM is Péter Márki-Zay, the conservative mayor of Hódmezővásárhely, a small town in the southeast of the country. A political outsider, a devout Christian and a father of seven, Márki-Zay is likely to win over centre-right and right-wing voters who would otherwise fear the “liberal” values of the united opposition. The latest polls indicate the opposition and Orbán are now neck-and-neck.

On learning the election date, Márki-Zay said the countdown had begun to the day on which the opposition would oust “Orban’s corrupt and greedy regime.” He chose to focus on his anti-corruption message.

“Oligarchs close to the government have amassed incredible wealth while Fidesz politicians are writing the laws according to their taste”, Márki-Zay declared, noting how millions of ordinary Hungarians are living on “humiliating wages”.