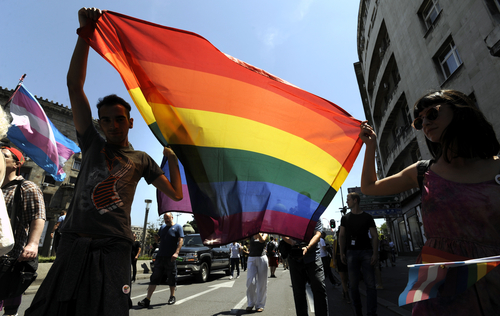 Brussels (Brussels Morning) Hungary’s Prime Minister Viktor Orbán has announced plans to call a referendum covering issues revolving around the country’s controversial anti-LGBT law. Orbán aims to seek popular support for the law, which has been lambasted by the European Commission as discriminating against LGBT people.

The law, which was amended during the legislative process to conflate paedophilia and homosexuality, effectively bans any “depiction or promotion” of homosexuality available to under-18s, including popular movies, TV series and books, as well as educating children about the very existence of homosexuality.

Orbán hit back against the EC procedure last week, calling it “legalised hooliganism”. He refused to acknowledge anything wrong with the law, maintaining that its purpose is to protect children against the kind of “sexual propaganda” that he claimed children in Germany are subjected to.

Facing a tough reelection campaign against united opposition in elections next year, Orbán has stepped up his commitment to what he claims are “Christian values”. Telling his supporters that children in other EU countries are subjected to LGBT propaganda, he presents himself as the defender of children.

In a bid to seek popular support for the controversial law, Orbán has now announced his government will hold a referendum on “child protection issues”. However, the list of questions he plans to put on the referendum ballot seems to have little to do with the law, and more to do with creating an appearance of public support by means of asking a series of loaded questions.

One of the questions would ask voters whether they would support holding sexual orientation workshops in schools without parental consent, something neither done nor contemplated before in Hungary. Voters would also be asked whether they believe gender reassignment procedures should be promoted among children, when, notably, such procedures have never been promoted anywhere in Europe.

Also being considered is a question asking if content that could affect children’s sexual orientation should be shown without restrictions – without making it clear what that content might be. Yet another question concerns whether gender reassignment procedures should be made available to children as well, even though there is no such mention of sexual reassignment in the law, and, besides which, changing gender is already illegal in Hungary.