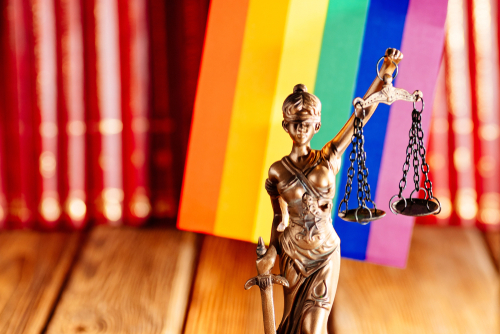 Statue of Justice - symbol of law and justice with lgbt flag. Lgbt rights and law

Brussels (Brussels Morning) A controversial Hungarian law banning “promotion or depiction” of homosexuality in media and locations accessible to minors threatens to overshadow the EU summit opening today, while the European Commission has blasted the law and announced legal action against Hungary.

The law, passed last week by Hungary’s ruling right-wing Fidesz party, is ostensibly aimed at combating paedophilia, but its vague wording means it can be applied to penalise any depiction of homosexuality, even for educational or entertainment purposes. Critics of the legislation also condemn the fact that it perpetuates the oft-disproven myth that paedophilia and homosexuality are linked.

The law, which has yet to be signed into force, was condemned on Tuesday by 16 EU member-states in an East-West divide, which saw Central and Eastern European states, former communist countries, mostly align with Hungary.

The push to condemn was led by Belgium, the Netherlands and Luxembourg during the EU Council’s discussion on Tuesday afternoon, when 16 signatories accused Hungary of stigmatising its LGBT population and breaching the EU Charter on Fundamental Rights.

European Commission President Ursula von der Leyen pledged next day to “take any action necessary” to stop the new law, calling it “a shame”. She was emphatic that it flies in the face of the EU’s fundamental values.

Germany’s Chancellor Angela Merkel, speaking in the Bundestag on Wednesday, said she personally felt the law is wrong, and that it was incompatible with her idea of politics. She observed said that a decision to legally challenge the law at the EU court-level was one that ultimately rests with the Commission.

The Hungarian government claimed that von der Leyen’s statement was based “on false allegations”, and that it represented a “biased political opinion”. Budapest maintains that the law is not discriminatory because it does not apply to sexual orientation rights of persons above the age of 18.