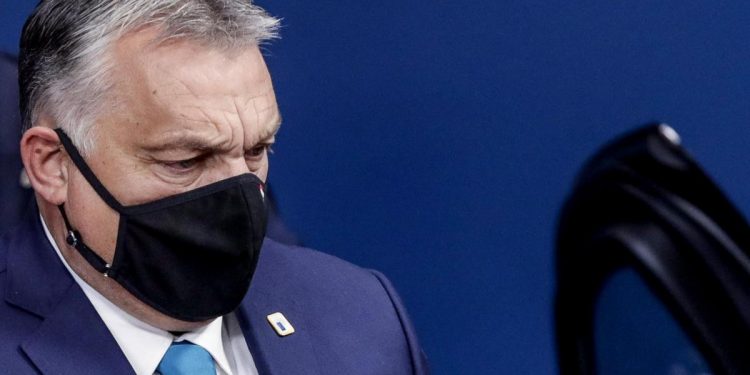 Brussels (Brussels Morning) Hungarian Prime Minister Viktor Orbán has threatened to veto the EU budget over new rules that tie EU payments to upholding the bloc’s democracy standards, FRI reported today, Tuesday. This places a question mark over the seven-year EU budget worth some 1.1 trillion euro and the coronavirus relief package worth 750 billion.

Last week, the EU adopted plans to make payments from the EU budget to member states conditional on their respective observance of EU democratic and rule of law values, which includes independence of the judiciary. The deal was reached between Germany as the holder of the EU presidency and the EU Parliament, with several MEPs praising the move on Thursday.

MEP Dacian Cioloș welcomed the proposal as a major achievement while pointing out that the EU was not a cash machine. On the other hand, Hungarian Justice Minister Judit Varga described the deal as a reckless move and a mistake.

According to the Hungarian Mandiner centre-right news portal, Prime Minister Orbán sent a letter to the EU in which he warned that, due to recent developments, he may not be able to “provide the unanimity required for the package adopted in July.”

This suggests that Orbán intends to veto both the EU budget as well as the coronavirus relief package in order to prevent the introduction of the new conditionality mechanism. Unnamed EU sources indicated to the AFP that EU Commission President Ursula von der Leyen and EU Council President Charles Michel had received the letter on Monday.

EU leaders, including Orbán, agreed in July to a looser mechanism for linking access to EU funds with upholding the rule of law. However, the EU Parliament insisted that the deal had to be more strictly worded, complaining that the agreement reached in July was too vague. MEPs felt it would not ensure that EU member states would be denied access to EU funds if they failed to uphold the bloc’s standards of governance.

Some MEPs have expressed concern that the judiciary’s independence is being eroded in Hungary and Poland. The EU Parliament is looking to force the two EU member states to toe the line by introducing the conditionality mechanism allowing the bloc to suspend budgetary payments for non-compliance.

Should Orbán veto the upcoming seven-year budget, the bloc would be unable to unblock it or release the planned coronavirus relief package. This would put many EU member states in a difficult position as they have been counting on the money to help them weather the pandemic crisis.