Hungary and Poland`s access to EU funds at risk 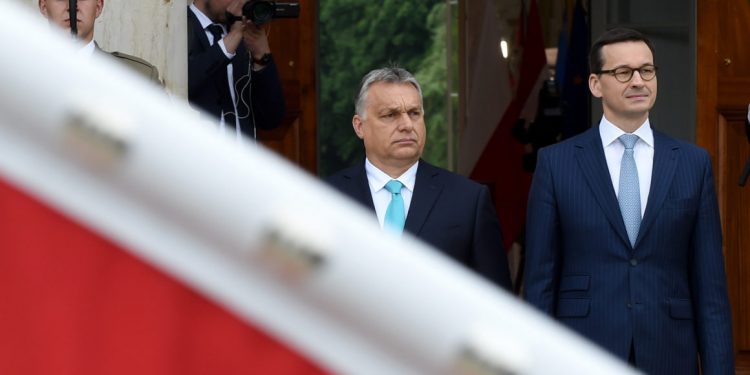 In what has been coined the cash-for-democracy fight, the European Commission’s first report on shortcomings in the rule of law points as expected to Hungary and Poland. Access to EU funds, including the coronavirus recovery money, is expected to be made conditional on respect for democratic fundamentals.

The European Commission launched the first EU-wide report on the Rule of Law yesterday, an assessment that looks to identify democracy gaps within the bloc. EU member countries Hungary and Poland performed poorly in the review. Hungary’s leader Victor Orban took issue with Commissioner Vice-President for Justice and Transparency Vera Jourova, who, in an interview with Germany’s Der Spiegel, described Hungary as a “sick democracy”.

The Commission’s first report on inadequacies in the rule of law comes as a majority of the EU countries approved a proposal by current EU president Germany over the modalities of conditioning EU funds against the country upholding the rule of law. That would include access to the new €750 billion coronavirus recovery fund.

Essentially, the report is meant to serve as an instrument for dialogue between member states and the European Parliament on the rule of law. The EU executive delivered an assessment report for each EU member country, assessing prevailing conditions in terms of their national justice systems, anti-corruption frameworks, media pluralism and freedom, and other institutional issues related to checks and balances considered fundamental to a successful system of democratic governance.

When it came to Hungary, the EU report said that “there is a systematic lack of determined action to investigate and prosecute corruption cases involving high-level officials or their immediate circle” by the Hungarian authorities. The Commission also cited corruption scandals and deficiencies in anti-corruption efforts in Bulgaria, Slovakia, Croatia, the Czech Republic, and Malta.

Rule of Law may block “unfit” countries from EU funds

In both Hungary and Poland, according to the report, the governing majorities have introduced numerous changes which have broadened political supervision over the justice system. Both countries have strengthened the position of the Prosecutor General in such a way that it limits accountability and democratic oversight over the institution. In Poland, the Prosecutor General is also the Minister of Justice with competencies to, among other things, interfere with every single investigation. In Hungary, the Chief Public Prosecutor is not accountable to the parliament, and the MPs’ rights to pose interpolations have been abolished. Moreover, in each instance, the integrity of the supposedly independent positions has been compromised by the appointment of incumbents whose loyalties are fully invested in serving the interests of the governing majorities.

“The aim of this report is to act as a warning system, it is designed to help member states address any deficiencies or potential problems. The focus should be on ensuring improvement and protection. However, the EU also needs to be equipped with adequate tools that are consistently used to thoroughly and fairly investigate and impose sanctions against any clear, repeated breaches of the rule of law when necessary,” EPP MEP Roberta Metsola declared.

In December 2017, after justice reforms that represented a major source of controversy in Hungary and Poland, the European Commission triggered the first phase of Article 7 of the Treaty on European Union, which can ultimately deprive a country of its voting rights if it is found guilty of violating EU values.

Is the EU following its Rule of Law?

After the publication of its first Rule of Law report, the Commission tweeted that “each citizen deserves to have access to independent judges, to benefit from free and pluralistic media and to trust their fundamental rights are respected.

However, sometimes, citizens are imprisoned without due process or sentenced after a politically motivated trial. That was the case with political leaders in Cataluña who ended up in jail after a controversial and undoubtedly politically-driven trial, that came on the heels of unofficial referendum in October 2017, led by the Catalan parliament’s pro-independence political parties.

“It is outrageous that there are political prisoners in Europe and that the European Commission remains silent and says nothing about it,” Alfred-Maurice de Zayas, UN expert for the promotion of democracy, said back in 2018.