by Valentina Brini
in In Depth 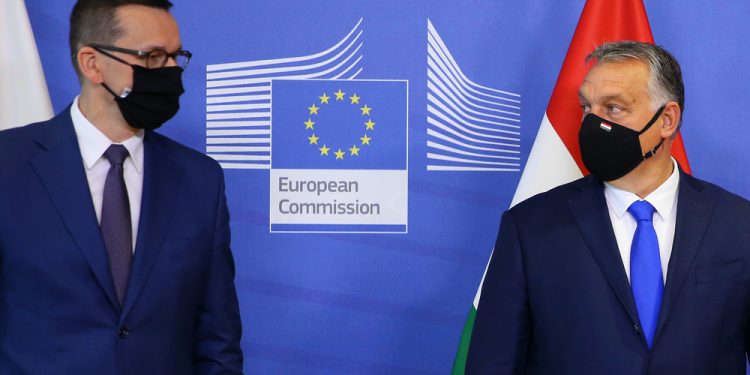 The EU institutions are set to progress with its coronavirus recovery fund without Hungary and Poland who have to date blocked the deal. The blockade, based on a new rule of law mechanism, could be at the detriment of their citizens, however, President of the EU Committee of the Regions Apolostos Tzitzikostas told Brussels Morning.

Brussels (Brussels Morning) The EU is standing firm. Faced with an impasse over a 750 billion euro recovery fund, currently being blocked by Budapest and Warsaw, EU institutions are set to launch the financial package without the two central European nations. Such a move could potentially wreak havoc on their regions.

Over the last few days, an increasing number of local and regional authorities from Hungary and Poland have voiced deep concerns about the impact of the delays on their local communities and have called on their national governments to immediately approve the EU budget and recovery plan. Budapest and Warsaw Mayors Gergely Karacsony and Rafal Trzaskowski appealed to the EU for emergency funding should neither of their national governments lift the vetoes and be excluded by the recovery fund.

“The veto by Hungary and Poland is at the detriment to their own citizens and their local communities who risk missing from benefiting from the largest investment package ever deployed by the EU”, the President of the EU Committee of the Regions (CoR), Apolostos Tzitzikostas, told Brussels Morning.

Local communities in Hungary and Poland at risk

The proposed recovery fund, financed by commonly-issued debt to help the worst affected countries, is part of a bigger 1.8 trillion euro financial package that includes the Multiannual Financial Framework (MFF) for 2021-2027. Budapest and Warsaw are obstructing the adoption of the financial package over their opposition to new safeguards that tie EU payments to respecting the rule of law principles. This mechanism, additional to Article 7, already within EU Treaties, could lead to the EU withholding funds to governments found in breach of the condition.

An agreement between 25 Member States would be unprecedented and could be self-defeating for the two nationalist governments, which are among the top beneficiaries of EU cohesion funds and stand to be sizeable beneficiaries of the recovery fund, receiving grants amounting to 3% of their gross domestic products, according to estimates from the European Central Bank.

The Bulgarian MEP Andrej Novakov, who follows the dossier closely at the European Parliament, explained to Brussels Morning: “In simple terms, much of [Hungary and Poland’s] public expenditure on infrastructure, business and employment support originates from the EU budget. The impact on their regional development would be significant as many potential and crucially needed projects will not take place”.

The accusation was rejected by Władysław Ortyl, the Marshal of Podkarpackie region in Poland, member of the right-wing governing party Law and Justice (Pis) and President of the European Conservatives and Reformists (Ecr) Group at the CoR. Speaking to Brussels Morning, he replied that “any attempt to bypass Article 7 [of the Treaty of the European Union], in itself not so clear, is illegitimate”, and that “the legal service of the Council has clearly stated that bypassing the rule of law mechanism, which would go beyond article 7, is illegal”.

Podkarpackie region is one of the largest beneficiaries of EU funds in Poland.

“We feel the impact of European aid and European funds in a positive way. We know that it has given a great impetus for development. We have managed to complete a lot of really great projects”, Ortyl pointed out, driving out the possibility of a deal without Poland and Hungary. “This scenario is also taken into account by us, but I don’t think that this will happen”.

The rule of law objection and ensuing clash is one of the most serious challenges to the endurance of the Union and, according to Novakov, is a “zero-sum game for Hungary, Poland, and the EU”, therefore “a compromise must revolve around keeping these three elements together.

“The EU cannot afford to establish a recovery mechanism for 25 Member States because this would further undermine its stability”, he said, especially in the context of a looming Brexit uncertainty”.

The most affected by the pandemic are the citizens across the Union — from Lisbon to Budapest and Warsaw. Therefore, Tzitzikostas appealed to EU leaders to reach an agreement as soon as possible because “delaying the EU budget and investment plan is putting lives, jobs and recovery at risk, across Europe”, he said.

“Given the gravity of the situation”, he added “speed and governance are of the essence. Our citizens and businesses desperately need support to cope with the impact of the pandemic. We need unity and cooperation: delays are risking lives and our economies”.

As the battle between the Member States on the EU general budget and the package to boost the economy goes on, the EU Council and the Parliament reached a provisional political agreement on how the Member States will be able to spend EU regional, cohesion and social funds for 2021-2027. Less developed regions will continue to benefit from substantial EU support with co-financing rates of up to 85% of funds provided by the EU.

The Parliament has succeeded in integrating some overarching principles for Member States to adhere in order to receive EU funding, including compliance with the EU Charter of Fundamental Rights, involving respect of the rule of law, while EU funds have also been linked to sound economic governance.