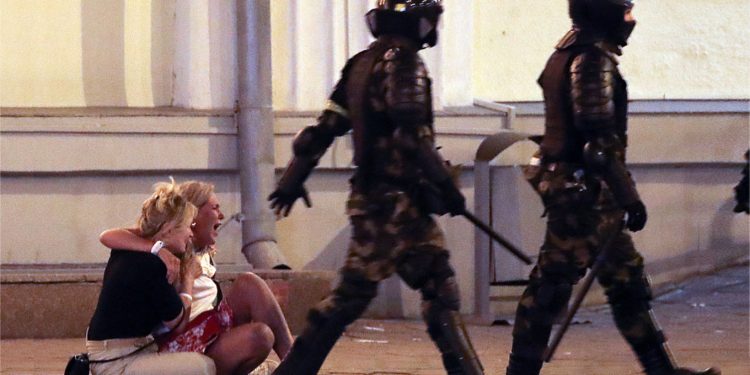 Brussels (Brussels Morning) Hundreds have been detained at the weekly protest in Belarus on Sunday, with the Viasna Human Rights Centre saying 504 protesters were detained across the country, Reuters reported yesterday, Sunday.

Protesters chanted “I’m going out,” the last written words of protester Roman Bondarenko who died in hospital in Minsk on Thursday. While the Interior Ministry claims Bondarenko was killed in a scuffle with civilians, denying responsibility for his death, demonstrators say he died due to a severe beating by security forces.

According to an unnamed witness, police in the Belarusian capital of Minsk used stun grenades and rubber bullets to disperse demonstrators marching against President Alexander Lukashenko. A witness claimed security forces pulled down opposition flags, kicked over memorial lamps and dragged detained protesters into vans.

The country has seen weekly protests since the disputed presidential election in August, with tens of thousands of protesters taking to the streets each Sunday. Protesters are calling on Lukashenko to step down, stressing that the election was rigged, an allegation Lukashenko rejects.

Belarusian opposition politician Sviatlana Tsikhanouskaya, who had fled to Lithuania after the August election, expressed support for Sunday rallies commemorating Bondarenko. The EU described Bondarenko’s death as an outrageous and shameful result of the Belarusian authorities’ crackdown on protests, and accused the Lukashenko regime of repressing the Belarusian people.

Police used water cannons and tear gas to disperse demonstrators in Minsk, AP reported Sunday. Lukashenko has been suppressing opposition as well as independent media over the last 26 years. He insists the West has incited the current protests and is refusing to negotiate with the opposition.

According to an AFP journalist, mobile internet access was limited and about 15 metro stations were closed in Minsk on Sunday, RFI reported. Tikhanovskaya called on allies to help the Belarusian people and to protect human rights. She urged the setting up of a humanitarian corridor for the injured, an international investigation of crimes and support for the media.

At least four have died in the protests against Lukashenko since the disputed election in August. Tikhanovskaya has described the crackdown on protesters as devastating.

Lukashenko enjoys the support of Russian President Vladimir Putin and has offered to reform the Constitution in order to pacify the opposition, while adamantly refusing to step down.