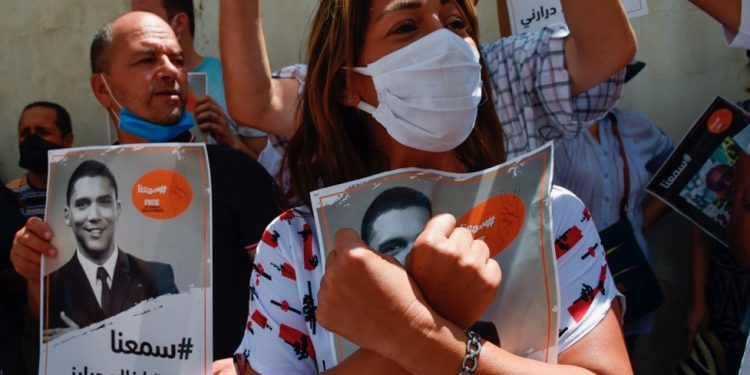 London (Brussels Morning) It is reminiscent of the Bouteflika era – a power vacuum without a president as new incumbent and COVID-infected Algerian President Abdelmadjid Tebboune continues treatment in Europe with little word on the future of the country’s leadership, just like under the five-term leader in 2013.

The uncertainty is an ominous sign for the trajectory of a country that has already been marred with political disaffection.

Rocked by protests since February 2019, until the onset of the pandemic, the movement known as the Hirak has been leading the charge for meaningful change in the North African republic.

A state crackdown on protestors, however, has escalated under the guise of lockdown measures and a new law presented as constitutional reform has led to a spate of arrests of journalists covering the protests.

One such Algiers-based reporter in particular, Khaled Drareni, has become a symbol of press freedom in the country after his arrest earlier this year, not unnoticed by the EU. As the bloc renews terms of cooperation with Algeria, the European Parliament has highlighted its deteriorating human rights situation, insisting states must take action.

After Abdelaziz Bouteflika assumed power in 2019, the Hirak was instrumental in compelling the 83-year-old to stand down as they demanded a new political system and an end to an opaque military and political network of elites – known as ‘le pouvoir’ – that has governed the country since its independence.

Drareni is one of the journalists credited with making the movement known beyond Algeria through consistent reporting of weekly protests. The Hirak had several demands for effectual change in the country: separating the military from the government, releasing all political prisoners, and electing a constituent assembly.

The low turnout of eventual elections in December 2019 and an even lower turnout – a record 23 percent – for a constitutional referendum failed to legitimise the government in the eyes of the Algerian population, particularly the Hirak.

While security forces took action against protestors before the onset of the pandemic, this had always fallen short of full-on state violence; however, under the guise of lockdown measures, authorities have stepped up arrests.

Drareni was arrested on 7 March this year while covering a demonstration, and again 20 days later and remained imprisoned.

“Khaled Drareni is an exemplary journalist, the symbol of press freedom”, said Me Nassima Rezazgui, a lawyer on his defence team.

On 10 August, the 40-year-old editor and correspondent was sentenced to three years in prison for “inciting unarmed assembly” and “undermining national unity”, reduced to two years on appeal on 15 September. “[They] are black dates for the Algerian press and for Algerian justice”, she said to Brussels Morning, over the phone.

Rezazgui confirmed, an appeal in cassation had been lodged on 23 September at the Supreme Court of Algiers. From now, it is a waiting game, she says, but they are intending to file a request for provisional release in the coming days.

“Attacks against journalists are nothing new in Algeria, but the sentencing to two years in prison of Khaled Drareni sets a dangerous precedent for freedom of expression in the country”, said Alexis Thiry, a legal officer for the MENA Rights Group, speaking to Brussels Morning.

Drareni was tried alongside Samir Benlarbi and Slimane Hamitouche who have already been released on time served.

“This is not an isolated case”, stresses Katalin Cseh MEP (Renew Europe), who supported the European Parliament’s urgency resolution last month – the second in a year – on the deterioration of human rights in Algeria.

“Algeria is an important neighbour and partner for the European Union”, Cseh told Brussels Morning, “These relations have to be based on respect for common values, such as the respect for human rights, democracy, the rule of law and freedom of the media.

“This is why we believe that the ongoing political transition really has to ensure the right of Algerians to participate in the democratic process and take part in protests”, she continued.

“No journalist should be arrested based on [these principles], only because they are doing their job”.

Articles 3.5 and 21.1 of the Treaty of European Union and Article 2 of the EU-Algeria Association Agreement state the Union and its Member States must put human rights at the centre of their collective and bilateral cooperation with Algeria. This commitment was just renewed on 7 December, after reportedly reviewing Algeria’s human rights situation, as well as a raft of other issues, including economic ties and trade. A 75 million euro sum to help with its economic and medical needs as it buckles under the pandemic was also agreed upon.

However, the Parliament resolution noted too the use of increased security restrictions to stem the spread of the virus was also being used to control civic space, peaceful protests and free speech.

In April this year, President Abdelmadjid Tebboune signed into law the criminalisation of “fake news”, subscribing 3,900-dollar fines and five-year jail terms for breaches that could target critics and members of the Hirak, placing at further risk freedom of the press, freedom of expression and freedom of association. A Penal Code amendment that was adopted after a “restricted” parliamentary debate, also increased penalties of Article 144 of the Criminal Code, previously used by Bouteflika to suppress the actions of journalists and human rights defenders, another throwback to the National Liberation Front leader’s rule.

“The price now is that an Algerian journalist can be sentenced to years in prison, all for reporting on a protest. And this is unacceptable”.