HR Borrell discusses Afghanistan on his first visit to Qatar 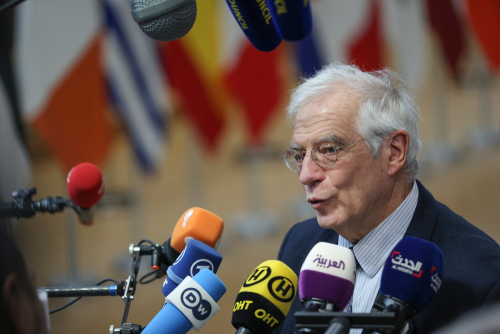 In a joint press conference, Borrell and Sheikh Mohammed condemned the recent string of human rights abuses in Afghanistan, with Doha calling on the Taliban to look to Qatar for an example of how to run an Islamic government.

Sheikh Mohammed stressed that Qatar, as a Muslim country, has an Islamic system in place, yet the country has women outnumbering men in workforces in government and in higher education.

Borrell echoed his Qatari counterpart’s statements in qualifying “some of the things that happened in Afghanistan recently” as “quite disappointing”. Borrell said he hoped it would be possible “to reorient” the Afghan government, and looked to Qatar to use its “strong influence” on the Afghan Islamist group to encourage it to improve its treatment of civilians.

Reflecting on another regional matter, the ongoing negotiations with Iran on reviving the lapsed nuclear treaty, Borrell said he believes that the talks will resume “within an acceptable period of time”, stressing that work continues “towards a quick resumption of negotiations in Vienna”.

The negotiations, initially restarted after US President Joe Biden came to power, stalled after the Iranian presidential elections, when ultra-conservative hardliner Ebrahim Raisi replaced his moderate Hassan Rouhani, who had negotiated the original 2015 nuclear treaty.

Borrell will continue his Gulf tour on Friday, attending the World Policy Conference (WPC) in Abu Dhabi, followed by a trip to Ryadh on Saturday, where he is to meet with the Secretary-General of the Gulf Cooperation Council (GCC),  Nayef bin Falah Al-Hajraf, and with Saudi Foreign Minister, Faisal bin Farhan Al Saud. On Sunday afternoon, Borrell is scheduled to meet with Yemeni President Abdrabbuh Mansur Hadi.