by Dejan Srbinovski
in Culture and Society 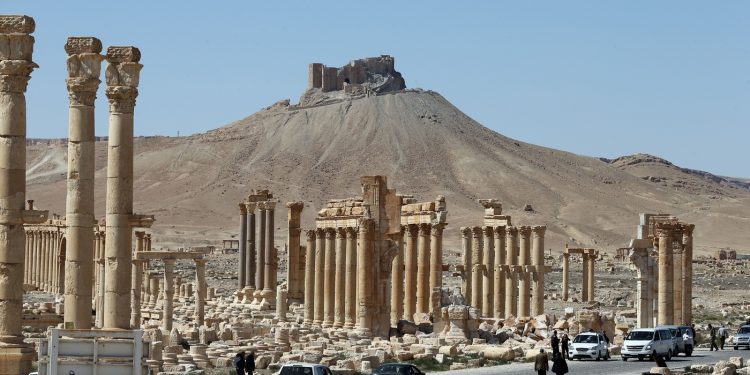 A picture from March 31 shows the remains of the ancient Syrian city of Palmyra. Jihadists of the Islamic State destroyed much of the site last year. Syrian troops backed by Russian forces recaptured Palmyra from ISIS on March 27.

The centre of Aleppo was a marvel. It was a demonstration of the multiplicity of both humanity and stone. It was an embodiment of the material and cultural wealth that once made Syria one of the luckiest and most civilised places on Earth – a California of the Middle East, blessed by climate, fertile land, physical beauty and its position between the Mediterranean and the Silk Road to the east. “My beautiful province,” as the seventh-century Byzantine emperor Heraclius called Syria, while retreating from Muslim conquerors, “what a paradise you will be for the enemy!”

In Aleppo there was, and mostly still is, the citadel, a mound growing upwards into improbably massive walls, a dream of castle-ness realised with crushing weight. Then there were the souks, a huge web of covered alleys and streets, spaces made of produce and transactions as much as of masonry, in which gems of architecture – a polychrome portal or a serene dome – would make themselves known amid the action and clutter, their arabesque decorations indecorously garlanded with electrical conduits and air-conditioning units.

Then there was the Umayyad mosque, built on the site of a Hellenistic agora, called after the dynasty that founded it in the eighth century but its surviving fabric coming from later periods. Stone, the material that made the mountain of the citadel and the caves of the souks, here became the polished, reflective plane of a great courtyard, as peaceful as the souks were frenetic, on which it was natural for groups of people to gather and sit.

This three-part ensemble represented a Syria made by millennia of inhabitation, conquered and reconquered by empires and dynasties. It was a country whose architectural blockbusters recorded this history: the Roman-influenced desert city of Palmyra, the mosques and palaces of the Umayyads, Abbasids and Ottomans, the Crusader castles, and what in the fifth century was the largest church in the world, St Simeon, in the countryside outside Aleppo.

I have been to Syria twice, the first time as a student nipping over the border from Turkey, the second time in 2009, to write an ill-timed travel piece praising its prospects as a destination. I remember in its architecture a spirit of free invention and delight (to generalise outrageously about many centuries of culture) that could be found in column capitals on St Simeon, in which the staid foliage of classical architecture is made to look as if it is blowing in the wind. Something similar is in the mosaics of the Umayyad mosque in Damascus, where a verdant paradise is shown against a gold background, or in the almost erotic flows of drapery on Palmyrene statues.

This spirit is in the polychromy of Islamic buildings, in the working of stone to look like tapestry, in the appearance of geometric evocations of infinite harmony in the middle of cacophonous towns. Harsh exteriors, whether deserts or city streets, give way to havens and sanctuaries, where you can sit on the cool marble ground and experience the deflection of light and breeze into ornamented shadows.

It was also a country of many cultures and faiths, often living in tolerance and cooperation, sometimes uneasy coexistence, until, locked into the ugly cage of frontiers made by the Sykes-Picot agreement of 1916, with the country’s differences goaded and inflamed by cynical politics and external actors, it has spent the last decade ripping itself, or being ripped, apart.

Syria’s architectural legacy has been a well-known victim and propaganda tool of the civil war. Islamic State famously took pleasure in detonating the temples and tower-tombs of Palmyra, with the delicate paintings and sculptures that they contained, and making sure the world knew about it. They also trashed Dura-Europos, an ancient city on the Euphrates, in their search for archaeological loot. But, as the dissident and writer Yassin al-Haj Saleh pointed out in 2016, in relation to their crimes against human beings, the west has been disproportionately fascinated by the horrors of Isis, “even though Assad’s victims outnumbered those of Daesh tenfold”. A greater human and cultural loss than Palmyra has been the centre of Aleppo, often said to be the oldest continuously inhabited city in the world, wrecked in battles between government forces and rebels.

In the face of so much destruction a natural reaction would be despair. The war continues, and economic catastrophe has now been amplified by both sanctions and Covid-19. Yet reconstruction is taking place, mostly with external funding. The Aga Khan Trust for Culture, for example, is supporting the rebuilding of some of the Aleppo souks. A number of churches have been restored with the help of foreign congregations. In some cases individual businesses have done what they can to clear up, repair and reopen.

The Umayyad mosque is being repaired. Its minaret, which collapsed in 2013, is rising from the ground again, its 2,000 fragments having been surveyed and catalogued and laid out like an unmade jigsaw puzzle in the courtyard. This work is being funded by the Chechen government, for whatever political reasons. Chechnya’s president Ramzan Kadyrov has never been noted for his finer sensibilities, but those who have seen the restoration work say it is sympathetic to the old.

The Museum of Islamic Art at the Pergamon Museum in Berlin, whose collections include both a carved wooden room from Aleppo and a large piece of Umayyad Palace that was donated by the Ottoman Sultan Abdul Hamid II to Kaiser Wilhelm II, is also doing its bit. Its Syrian Heritage Initiative has collected an archive of 200,000 photographs of Syrian sites taken before the war in order to inform reconstruction. It has documented historic buildings and the damage they have suffered.

It is analysing the shapes and layouts of residential neighbourhoods, so that rebuilding might follow their patterns. It has invited Syrians to record stories of their lives and work. It has created a link, as it puts it, “between the international scientific community and the local people, the scientists sharing the historical knowledge and the local community sharing their memories on certain historic places”.

This work brings choices and debates, at their centre the difference between Palmyra and Aleppo. Palmyra has been the poster city for Syrian heritage – Boris Johnson, for example, when mayor of London, had a replica of its Arch of Triumph erected in Trafalgar Square “in defiance of the barbarians”. But, as beautiful as it was, the city as it stood before the civil war was partly a fiction created by archaeologists during the French mandate after the first world war. They cleared out the Arab homes that had been built in the ruins over centuries and re-erected fallen structures. They made a version of Palmyra that had never quite existed before.

Palmyra was also the site of Tadmor prison, a centre of torture that was one of the most hellish places on Earth, which stood a mile away from the largely oblivious tourists disgorging from their luxury coaches. No blame for the prison attaches to the classical remains, of course, but their proximity dramatises the disconnect between external perceptions of the country and the experiences of its citizens.

For these reasons the ancient ruins represent the heritage most admired outside Syria, not that lived by Syrians themselves. This is not to say that it should never be re-erected, only that it is not the most pressing priority. “It can be repaired any time later,” says Stefan Weber, director of the Museum of Islamic Art in Berlin. He cites the example of the baroque Frauenkirche in Dresden, which took 60 years to be rebuilt after the allies bombed it in 1945. So long as “rubble management” – the preservation and recording of stones – is done correctly, and still-standing structures are stabilised, Palmyra can wait.

He compares Aleppo to Barcelona or Florence, whose greatness lies in the totality of each city. “It was outstanding for its religious plurality and its intangible heritage, its music and its cooking,” he says. “What’s special about this city is its living cultural heritage,” says Dima Dayoub, an Aleppan architect now working in Berlin for the Syrian Heritage Initiative. “The priority is not the churches or the mosques, it’s for people to return. We need to help people reconstruct their homes and their livelihoods.”

It is therefore the souks, some of which were turned into bomb craters, and the residential districts that matter most. Thierry Grandin, an architect working for the Aga Khan Trust for Culture, says that their restoration of some of the souks has been accompanied with efforts to ensure that the original shop owners can return. They are also helping local stonemasons to develop their techniques, and “training people to train people”, so that skills and employment can last into the future.

It is a vast task in a country still mostly focused on survival. In a process that has so far taken five years, 650 metres of covered souk has been rebuilt or rehabilitated, out of an original total of 9km. It will take “10 to 20 years, minimum”, says Grandin. Quality will be variable. “Given the available expertise and funding right now,” says Dayoub, “I applaud everything that people are trying to do. But at the technical level it could be improved.” At present there is no overall strategy, just the best efforts of individuals and agencies. Given that a malevolent and corrupt regime remains in power, it is impossible to tell how well they will manage the best interests of the country’s urban fabric.

From my trips there I also remember the ubiquitous images, in cafes and on traffic roundabouts, of Bashar al-Assad, with his tight lips and teenage moustache, or of his father Hafez, who looked like an evil version of a Peter Sellers buffoon. It was hard to miss that this was not a happy country. You could feel that the regime, as Yassin al-Haj Saleh has written, imposed an existence “deprived of any moral, ethical, spiritual and aesthetic dimensions, purely worldly lives to the point of abject cynicism”. We now know just how devastating this mentality would be. The very great challenge is to recover, in the most difficult imaginable circumstances, the best spirit of Syrian city-building.