How Georgia Survived the Trump Presidency 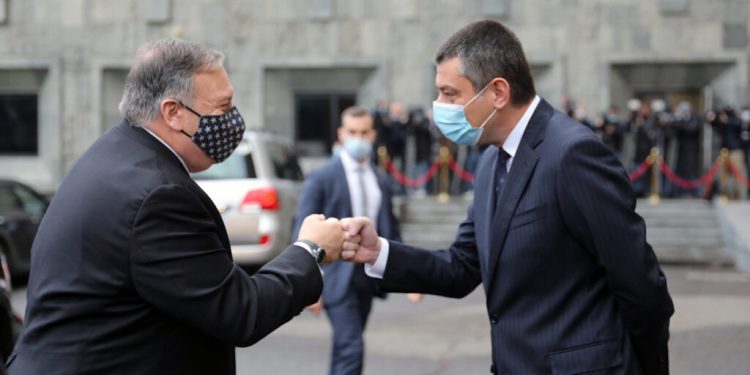 New York (Brussels Morning) Last week US Secretary of State Mike Pompeo made a brief visit to Tbilisi. Pompeo’s comments a few days before the trip when he endorsed defeated American president Donald Trump’s efforts to overturn the election outcome, meant that any efforts by America’s top diplomat to address the problems in Georgia’s own recent elections would have been a new level of hypocrisy for American foreign policy. Fortunately, during his brief time in Georgia, Pompeo did not focus a lot of attention on either country’s election.

Instead, the gist of the visit was that the US was recommitting itself to support for Georgia, Georgian territorial integrity and the ongoing and strong bilateral ties between the two countries. On the surface, there was nothing new or particularly newsworthy about those talking points.

Similar pledges and platitudes could have come from any American Secretary of State over the last quarter century or so. However, that is what made the visit significant.

Despite the election in 2016 of an American President who benefited from Russian assistance during the campaign and whose relationship with Russian President Vladimir Putin has never been fully explained, Georgia’s relationship with the US over the last four years has either remained largely the same or even slightly improved. That is a tremendous accomplishment for Georgia.

When Trump became president, Georgia was at risk of seeing decades of good relations with the US become endangered because of both Trump’s belief that the US should play less of a role in the world and because Russian President Vladimir Putin cares a lot about what happens in Georgia.

It is not at all difficult to imagine that in one of those meetings between Trump and Putin where the American people never learned what happened, that the Russian president might have brought Georgia up and that Trump, who always seemed to trust Putin too much, would have followed Putin’s lead. Fortunately for Georgia, that never happened.

Georgia also was never dragged into American politics the way, for example, Ukraine, another post-Soviet country that is seeking greater integration into the west, was. During the impeachment hearings in late 2019 and earlier this year, we learned that assistance for Ukraine that was supported by both parties in both houses of congress was held up because Trump wanted political favors from Ukrainian President Volodymyr Zelensky.

It may be counterintuitive, but Georgia’s greatest strategic accomplishment over the last four years, with regards to the US, was staying out of the spotlight.

Even during a presidency as erratic as Donald Trump’s and even with an American president with disturbing ties to Russia, as long as Georgia was not in the news, it was relatively safe from the capricious decision making of an unpredictable American president. Trump’s decisions such as pulling American troops out of northern Syria, weakening US ties with NATO and withdrawing from the Paris Climate accords have caused problems for many American allies, but Georgia was spared that.

There is another stranger, aspect to the bilateral relationship between the two countries which goes back to when Trump was a brander and reality television show star and Georgia was led by Mikheil Saakashvili, whose party lost power in late 2012. A few months before that election, Trump visited Georgia and announced plans to build a development in the Black Sea resort town of Batumi.

That hotel was never built, but the two men, who are temperamentally not all that different, struck up a friendship. A close friendship between Trump and Georgia’s former president who is now a permanent gadfly oppositionist whose talk of revolution in Georgia has been destructive and drowned out more rational opposition voices, a role Trump may soon assume in the US, would have been very destabilizing for Georgia.

Saakashvili sought to make that relationship happen, but failed. Shortly after Trump’s inauguration a photograph circulated online of a forlorn Saakashvili on the literal periphery of the events. In the first months of Trump’s presidency, Saakashvili tried to get the attention of the Trump administration by supporting the American president on various media platforms, but did not get any real traction there either.

For Georgia, the irony is that after decades of trying to remain a top priority for the US and of seeking to elevate their profile in Washington, the key to their success, against substantial odds, in strengthening the bilateral relationship over the last four years was in keeping a low profile at the highest levels in Washington while continuing and bolstering the legislative, NGO and agency sinews that have long been central to ties between Georgia and the US.

A visit from the Secretary of State, one who had publicly embraced Trump’s lies about the American election, in the waning days of the Trump administration was more fraught with possible downsides than many realized, not least because in the days before Pompeo’s visit, Trump had already begun to further disrupt US relationships and create more problems for President-elect Joseph Biden. Fortunately for Georgia, and the US, Pompeo stuck to the usual American script. This was a quiet victory for Georgian diplomacy culminating four years of playing a tough hand with the US very well.