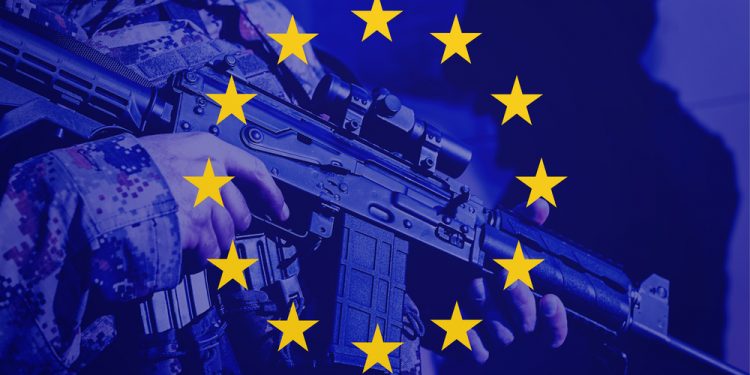 Soldier with machine gun with flag of European Union

Athens (Brussels Morning) The UAE government approved a 15.8-billion-dollar (58 billion dirhams) industrial investment budget for 2021, a large share of which is to build up the Emirati position in the European defence industry.

Stockholm is a favoured destination for direct investment in the defence industry in northern Europe and Athens in the south.

Sweden has a world class defence industry that is not fully integrated with broader defence consortia, where the UAE can play a decisive role. Greece has a major procurement program, which is not matched by industrial capacity, while its strategic rivalry with Turkey is in line with Emirati foreign policy.

The enemy of my enemy is my friend

Today the UAE and Turkey are on opposing ends in every geopolitical conflict in the broader region. In November 2020, Greece and the UAE signed a foreign policy and defense agreement, which completes a picture that includes Cyprus, France and, to some extent, Israel.

Greece has agreed to support the Emirati Airforce with pilot training, an area in which Greek forces excel. A source that has direct knowledge of the negotiations told Brussels Morning that the UAE is also preparing to launch a large-scale industrial cooperation partnership with Greece in ammunition production as well as research and technology.

The Greeks are also seeking to upgrade their military arsenal, particularly its warships and older fighter jets. The UAE will be sponsoring some of these upgrades, becoming stakeholders in the European defence industry while gaining a strategic partnership with a NATO member state.

Greece is seeking to join the value chain that produces the fifth-generation F-35 Lightning II stealth fighter jets, a program from which Turkey excluded following the decision to buy the S-400 Russian Air Defence Missile System. Athens seeks to expedite the delivery of second-hand fighter jets to consolidate the partnership.

The UAE, which already operates the most advanced variant of the F-16, seeks to procure 50 F-35s and 18 Reaper drones from the US. In sum, there is a strategic rationale to combine forces to seek a role in the F35 value chain.

Back in 2017, the UAE received an offshore patrol vessel, named Arialah. It was a ship designed by the Dutch firm Damen, built in Romania, with France’s Thales managing systems integration and completed in the UAE by Abu Dhabi shipbuilding.

Italy is currently leading a group of four PESCO participating countries involved in developing a European Patrol Corvette (together with France, Spain and Greece). They had requested the European Defense Agency’s support for moving this ambitious project forward.

Italy’s Capability Director, General Giovanni Iannucci noted last month that the European Patrol Corvette programme aims to create a new Class of ships designed for a variety of Homeland and National Security missions and is “an excellent opportunity for the whole European Defence and in particular the military shipyards sector to work together in order to foster industrial synergies, operational interoperability and maintain a technological advantage”. Through investment in Greece, the Emiratis are gaining a foothold in pan-European value chains of this kind.

France and Greece, two out of four members of the group, are UAE’s strategic partners. The Emiratis still need to enhance their maritime defense capabilities in order to guarantee the protection of tankers off their coast in the Gulf.

The UAE does not have the workforce to build an entirely sovereign defense industry but aims to acquire a global supply chain role.

UAEs aim dominance in the skies

Meanwhile, the UAE has placed a one-billion-dollar order for two additional GlobalEye spy planes with Swedish aerospace giant Saab announced on Monday. The contract is an extension of the deal signed in 2015 for an initial order of three GlobalEye aircrafts.

Since 2017, the UAE spent more than 275 million euros on military procurement and training from the UK alone.

Apart from Sweden, the UAE is also building ties with the Norwegian defence industry, although put on hold since 2018 due to human rights considerations.

But, the way global supply chains work, a national foothold in a defence industry gives them an opening to licensing and value chains that are not accessible to a Middle East country. The cumulative result not only that the Emiratis co-own, assemble and maintain the weapons they procure, but that they can play a role in global arms trade and, therefore, major players in shaping common foreign and defence policy.

The end result is that the Emiratis are major NATO and EU players, by proxy.