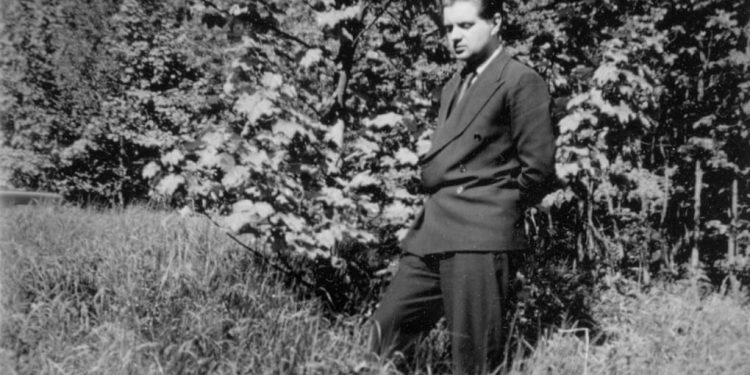 Unseen diary entries about the early life of the British artist Francis Bacon reveal the onset of his fleeting fixation with Nazi culture and show how random and disturbing obsessions shaped his unorthodox talent.

Taken from the journal of his cousin and close confidante, Diana Watson, these strange and candid accounts shed new light on the thoughts of one of Britain’s greatest modern painters in his early career.

In one diary entry from 1934, Watson speaks of Bacon’s fascination with Hermann Göring, chief architect of Hitler’s police state.

“He [Bacon] talked of the return to nationalism and vitality apparent lately … He seems to be obsessed with Göring,” wrote Watson in April that year, going on to quote her cousin’s view of the leading Nazi: “When a person feels as strongly as that, they cease to be a dilettante.”

Four months earlier, she had described Bacon’s intermittent desire to leave Britain and of a discussion they had together after reading reports of the German political marches in the newspaper. By November 1934, she writes that he is living in Berlin and has told her “he will stay indefinitely. He felt that for the present he really had found his spiritual home.”

But the painter’s fleeting interest in Nazi regalia and nationalist ideology were just part of a wider picture in which chance encounters and odd accidents were welcomed by Bacon as a way to expand the imagination, according to Watson’s diary, which has been acquired by Francis Bacon’s estate, and is one of two revealing journals extracted in a new book, Inside Francis Bacon.

Watson, who was one of the first people to buy Bacon’s paintings, travelled extensively with her charismatic cousin and listened with attention as he explained his feeling for Göring, for the iconography of crucifixion and for Emily Brontë’s unsettling novel Wuthering Heights. She also observed the growth of those dark and violent themes, such as crucifixion and masochism, that were to inspire Bacon’s work until his death in 1992 at the age of 82.

“I had to include Watson’s Nazi references, along with his other interests at the time, because I am trying to be doggedly truthful,” said Martin Harrison, the Bacon expert and biographer who has edited passages of Watson’s diary for the new book, published by Thames and Hudson next month. “Every one of the things that shaped his paintings later was clearly being formulated back then. People have written of his ‘flirtation’ with fascism but it was not really that.” Harrison argues that Watson’s diaries show that the artist was diving into different worlds as a way to stimulate himself.Advertisement

“He loved the German uniforms. He wanted to be raped by these guys. I don’t deny anything about Bacon’s weird sexuality, if you want to call it that, but he was never really a fascist sympathiser. How could he be, as a gay man? It was a passing thing, and he moved away from all that,” said Harrison.

Watson was an ambulance driver during the war but Harrison now suspects she also spied for the British government, as well as moving in bohemian circles with her cousin. She repeatedly admires the way Bacon was able to embrace the company of strangers, from any social background, and was as at home in a country house as a Lyons Corner House.

“I feel very sympathetic to Diana,” Harrison said. “She seems to have worshipped Bacon then. She was from a well-off racing family and he offered her a way out of all that. She was quite racy, and I am pretty sure she worked for the secret services because she refers cryptically to her work going well at Berkeley Square. Well, she was certainly not working around there as couturier.”

Watson also seems to have spotted the theory of random chance that went on to inform Bacon’s artistic philosophy. “She noticed his themes and obsessions emerging, like the idea of the crucifixion and the suffering he identified with. You are seeing it all through her take on Bacon, admittedly, and much of it is very staccato reminiscences, or has been rewritten, but she clearly supported and understood him,” he said.

Perhaps the passages in Watson’s diary that illuminate his art the best, Harrison believes, are those showing his growing belief in fate. In a Tate Gallery catalogue for another artist’s show in 1953, Bacon explained his theory, in which “real painting is a mysterious and continuous struggle with chance”.

In 1932, Watson writes: “He always had a feeling that miracles did happen. He was so accustomed to being carried along by chance”. A year later she writes:“F always had contacts by accident. On decks of ships, waiting-rooms of aerodromes, restaurants, backstage, Lyons – never going to a house.”

These encounters were not all brief romances. One future friend and mentor he met on board a ferry was Eric Allden, who, like Watson, became infatuated with Bacon. His extensive diary entries are also in the book. But Harrison has not been able to solve one mystery. Watson indicates that Bacon stayed in Paris in his youth with an influential painter, who may have been Spanish, who seems to have had the initials PG: “I have been through the Paris directory with no luck. So £100 to the person who can work out who this painter was!”