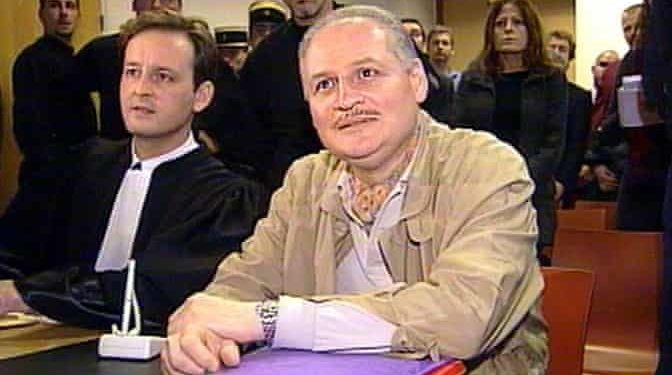 Two men and a heavily pregnant woman stand in a hotel room in Prague. The men are arguing with two officers from the Czech state security agency, sent to convince them they should leave on the next available flight. A warning that assassins from the French secret services are on their way to kill the three ends the dispute. One stows a pistol in his jacket pocket, the second straps on another two, the woman fastens more weapons around her waist. By late afternoon, they had left on a flight to Moscow.

It was June 1986 and the last visit of Carlos the Jackal to Czechoslovakia. Neither the notorious terrorist, nor his sidekick, nor his wife would set foot in the Communist-ruled state again. For most of a decade, Carlos had been travelling and living in eastern Europe. Now he was no longer welcome.

The terrorist, whose real name was Ilich Ramirez Sanchez, had gained global notoriety with a series of attacks carried out on behalf of Palestinian extremists between 1973 and 1975. In the west, the polyglot Venezuelan radical was frequently portrayed as an agent of the KGB, trained and armed on behalf of Moscow’s security service by counterparts in the Soviet satellite states of central and eastern Europe.

Now, classified documents discovered in archives in eastern Europe reveal a different picture: not of a master terrorist working hand in glove with ruthlessly efficient regimes to launch attacks in the west, but of an arrogant, demanding, and unreliable terrorist entrepreneur who manipulated the anxieties of insecure decision-makers and the ignorance of security officials from the Baltic to the Black Sea until they finally ran out of patience.

“The archives show us that [these states] were on the defensive, often unstable and worried that violence would spill over behind the Iron Curtain … There is no evidence for any plan for a destabilisation campaign targeting the west,” said Adrian Hänni, a Swiss historian who has edited of a new collection of essays on eastern European support for terrorism during the cold war.

The 1970s saw a wave of terrorism originating in conflicts in the Middle East but targeting western and southern Europe. High-profile attacks – including a series of hijackings of civilian passenger planes and the Munich Olympics massacre in 1972, as well as many bombings – rattled politicians unsure of how to deal with this new threat. One potential solution was to reach secret understandings with the attackers.

“States in both west and east Europe faced similar challenges. Governments were anxious about how to cope with these groups, and did a series of defensive accommodation deals,” said Hänni.

Carlos was the son of a wealthy Marxist lawyer who joined the Popular Front for the Liberation of Palestine before striking out on his own. His reputation for ruthless violence led many officials on both sides of the Iron Curtain to overestimate the threat he posed.

The complex relationship between Carlos and the Communist regime in East Germany was revealed in the mid-1990s when researchers and investigators gained access to the archives of the Stasi. These showed the feared secret police had offered support to a wide range of perpetrators of violence, including the Venezuelan.

But the dealings of Carlos with other Soviet satellite states in Europe are only now becoming clear. Though regimes were ideologically committed to socialism, anti-imperialism and “revolutionary” nationalist causes such as that of the Palestinians, more mundane considerations often determined policy towards Carlos and similar figures.

Some terrorists were targeted as sources of intelligence; others as potential opportunities for commercial gain as middle men for arms deals; a few provided access to western technology or other goods. Only very rarely was their readiness and ability to kill or maim exploited.

In Romania, the security service sought to deploy Carlos to kill or intimidate dissidents overseas. One mission led to the bombing of the Munich offices of Radio Free Europe, which broadcast anti-Communist programming and was critical of the regime in Bucharest, in 1981. In return, Carlos was given foreign passports, safe houses, bank accounts, training, weapons and explosives.

Elsewhere, most states sought simply to conclude “non-aggression” pacts offering a degree of toleration if the terrorist agreed not to attack on their territory or their interests. “It is the myth [about his capabilities] that allowed him to do this, and he understood that this was one of his biggest assets,” said Hänni.Carlos found sanctuary in Hungary for several years, though state security kept his group under close surveillance and unsuccessfully tried to persuade him to leave after the RFE bombing. Authorities in Bulgaria saw the Venezuelan terrorist as a challenge, not a collaborator, the new archives reveal.

“Bulgarian state security was afraid of attacks on Bulgarian territory or against interests overseas, so one task for them was not to provoke groups or individuals like Carlos,” said Jordan Baev, a professor of history at the University of Sofia, who has contributed to the forthcoming book. Carlos first visited Czechoslovakia in 1978. A year later, he returned for meetings with representatives of other terrorist groups and a Syrian “diplomat”. He shopped for perfume, whisky and cartons of cigarettes, drank in the Wallenstein pub and ate in an Indian restaurant on Wenceslas Square, reports in the archives say. On one visit Carlos locked himself out of his room, running down hotel corridors waving a pistol. An official from state security let him back in with a skeleton key.

Daniela Richterova, lecturer and cold war terrorism expert at Brunel University, who has extensively researched the newly available archives, said individuals like Carlos posed a dilemma for many states in eastern Europe.

“Security services were ruthlessly effective with domestic dissent but when in the 1970s they start seeing these really exotic and dangerous figures coming with fake names, bad tempers, questionable credentials and unclear goals, they were not prepared at all,” Richterova said.

“Officials knew that they were unable to prevent Carlos entering Czechoslovakia by using false identities and passports, and did not want to expel him for fear he would target the country in reprisal. Instead they settled for a ‘surveillance’ strategy, sometimes observing the terrorist and his associates secretly, sometimes letting them know they were being watched.”

In 1982 and 1983, Carlos orchestrated a bombing campaign in France to force Paris to release his then girlfriend, Magdalena Kopp, jailed for possession of explosives. But the days of exploiting eastern and central Europe as a base were coming to the end. Within three years, almost all states there moved to expel Carlos and his kind or deny them access to their territory.

“Intelligence services realised that there was not so much to fear if they kicked them out. The US was also getting more information on who was where, and there was a worry of that becoming public,” said Hänni.

Carlos fled to Damascus, and his 1986 trip to Prague with the pregnant Kopp appears to be the last time he visited Europe until French secret services captured him in Khartoum in 1994 and brought him, aged 44, to stand trial in Paris. He was found guilty on charges of murder, and jailed for life.