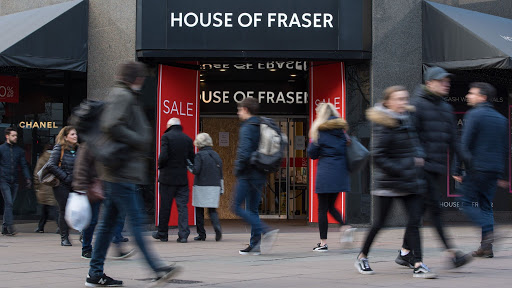 File photo dated 07/01/18 of the Oxford Street, London branch of House of Fraser which is one of those expected to close after the retailer announced plans to shut 31 of its 59 stores across the UK and Ireland as part of a rescue deal, impacting around 6,000 jobs. PRESS ASSOCIATION Photo. Issue date: Thursday June 7, 2018. See PA story CITY HoF. Photo credit should read: Dominic Lipinski/PA Wire

Mike Ashley’s Frasers Group has threatened to close stores if landlords will not agree to move to rents based on sales figures, after it said Brexit and the coronavirus pandemic led to “the most challenging year in the history of the company”.

Underlying pre-tax profits for the group, which owns Sports Direct, House of Fraser and Flannels, slumped by 18% to £117.4m in the year to 26 April as sales at its core sports division dived 14.6%, excluding the acquisition of the digital gaming group Game.

Total revenues for the group increased from £3.7bn to £3.9bn after a number of acquisitions including Game, Sofa.com and the fashion brand Jack Wills.

Sales at Frasers Group’s premium lifestyle division, which includes the fast-growing Flannels designer chain as well as the troubled department store House of Fraser, rose 18.6% as it opened six new Flannels stores and closed five ailing House of Frasers. However, the division made a £33.2m operating loss after a £51.4m loss the year before.

Ashley said his objective for the forthcoming financial period was to move the group’s leasehold estate towards turnover-based rents across all its chains in all territories. Such rents are typically lower than traditional leases, which have set terms agreed over a period of years.

“Long-term leases will be signed with collaborative landlords and those willing to co-invest in the elevated store model. However, it is possible further store closures will occur over the coming year where such terms cannot be agreed,” Ashley said.

House of Fraser, which operates from 48 outlets, could be particularly vulnerable to store closures depending on lease negotiations. The chairman, David Daly, said the department store “remains a challenge”.

Alongside likely store closures, the group intends to invest more than £100m in its online business, with a particular focus on Flannels. It said online sales had grown strongly during the high street lockdown, when all its UK stores, and most in other countries, were forced to close.

Flannels continues to be a “key area of development”, with plans to open stores up to 60,000 sq ft in order to house beauty, services and food and drink provision.

In a typically long and wide-ranging statement, Frasers also reiterated criticism of the handling of Debenhams. The value of Frasers’ shareholding, on which it had spent about £150m, was wiped out when the the department store collapsed into administration in April 2019. Ashley had made no secret of his desire to take control of Debenhams, which dropped back into administration in April this year.

Daly said: “It is scandalous that this business has now been in administration twice. To date and to our knowledge, there seems to be a lack of political or regulatory interest in investigating the impact on shareholders in the initial administration, and now in the second administration we expect that further stakeholders will suffer.”