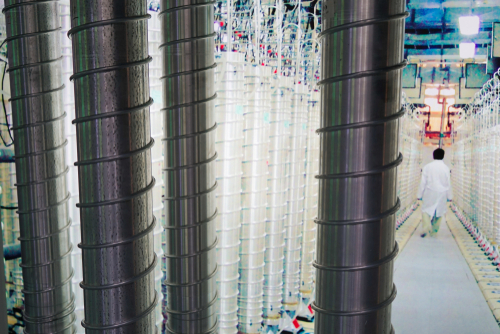 Paris (Brussels Morning) Iran’s Foreign Minister Javad Zarif has said that the EU could play a mediating role in the dispute between his country and the US over Tehran’s nuclear program, through “a mechanism to synchronise it or coordinate” the return of both countries to the deal.

In an interview with CNN’s Christiane Amanpour on 1 February, Zarif said that the EU High Representative for Foreign Affairs and Security Policy, Josep Borrell, could act in his role as coordinator of the Joint Commission of the JCPOA and “choreograph” the actions that needed to be taken for both countries to return to the negotiating table. He further called on the US to demonstrate its bona fides, adding that Iran would be immediately ready to come back to the deal.

In the meantime, newly-appointed US-Iran envoy Robert Malley held meetings with UK, French and German foreign ministry officials, Reuters reported on 30 January. According to European diplomatic sources quoted by the agency, the meeting aimed to “take stock of the dossier and to assess what our state of mind is”, but the State Department did not respond to requests for comment. His tasks will include persuading Iran to rein in its nuclear program and halt the uranium enrichment before reaching out to Russia and China, which were also part of the P5+1 group of countries during the 2015 agreement.

Malley was part of the Obama administration team that negotiated the nuclear deal or Joint Comprehensive Plan of Action (JCPOA) as it is officially known. Reached by six major powers and Iran in 2015, it offered sanctions relief in return for Iran rolling back its uranium enrichment program, a potential initial step to building nuclear weapons.

Trump withdrew the US from the agreement in 2018 and reimposed sweeping sanctions on the Iranian regime, designating it as the number one threat to stability in the Middle East and beyond.

Referring to comments by national security adviser Jake Sullivan that Iran would soon have enough fissile material to build a weapon, Zarif told the CNN it was a “statement of concern more addressed to the public opinion than to reality”. He repeated that Iran does not seek a nuclear weapon as it considers that nuclear weapons “will not augment our security and are in contradiction to our ideological views”.

More importantly, he stressed that the uranium enrichment could be rolled back in “less than a day”, seen as doubling down on the regime’s demand to ease tensions before negotiations, Al Monitor wrote. The regime had previously threatened to block access to International Atomic Energy Agency inspectors to its nuclear facilities if the US does not return to the accord, Deutsche Welle reported. For its part, the US administration demands that Iran resumes compliance with the deal’s terms before negotiating, thus locking the two sides in a “who blinks first” deadlock.

US President Joe Biden has conditioned a US return to the deal should Iran abide by the obligations laid in the JCPOA, while vowing to offer Iran a “credible path to diplomacy” and then seeking a broader pact to deal with Iran’s ballistic missile program and regional proxies. His choice of new envoy is seen by several Middle East observers as heading toward this conclusion.

According to the New York Times, Malley held a number of senior positions under the Obama and Clinton administrations with a focus on Middle East affairs.

He had earlier worked for the 2008 Obama electoral campaign but later resigned as it emerged that he had held meetings with officials from the militant Palestinian group Hamas. He was a senior fellow, then president and CEO of the non-profit International Crisis Group, which focuses on conflict resolution and human rights.

He was also widely lauded on social media by peers and colleagues for his “moral integrity and diplomatic finesse” as well as demonstrated understanding of geopolitics, human rights and international affairs.

But the nomination has caused a backlash by more conservative circles in the US, who expressed concerns even before the official announcement of the appointment, that he would be too “dovey” on Iran or even anti-Israel.

“Malley has a long track record of sympathy for the Iranian regime and animus towards Israel. The ayatollahs wouldn’t believe their luck if he is selected” conservative Senator Tom Cotton tweeted, for whom negotiating with the clerical establishment equals treason, adding later, “Appointing radicals like Malley gives the lie to all of President Biden and [Secretary of State] Tony Blinken’s rhetoric of unity”.

The question of Malley’s appointment is mainly a political one, as reaction from diplomats and academia worldwide shows, underlining the deep rift among different approaches to the Iran issue in Washington.

Renowned Middle East studies scholar Shibley Telhami said in a tweet: “Congrats to team @JoeBiden for refusing to be bullied. Rob Malley is outstanding and the best choice for the job. Had the team given in, the bullying would never stop. This was not about Rob, it was about Biden”.

“This is not really about Rob”, a former senior Obama official told Politico. “It is about the hawks using Rob as a gateway into critiquing Biden’s proposal to move back into the Iran nuclear deal. Rob is just a vehicle for hawks in Congress and the region to try to bludgeon and coerce the new president out of a policy he was elected to implement”.

In an article for the Washington Post, Jason Rezaian who was held hostage by the Iranian regime and whose release the Obama administration negotiated noted: “Simply put, in terms of negotiating with Iran on a range of issues, from strategic considerations to human rights, this team had exponentially more experience on its first day in office than the Trump administration was able to amass in a full four years”.

The conservative concerns are widely shared by Israeli and Gulf partners of the US. Back at the time of the JCPOA Israel and the Gulf monarchies had lashed out at the Obama administration for being left out of the negotiations and considering the terms of the agreement not harsh enough to quell Iran’s ambitions in the region.

In recent weeks, Israeli officials have openly disagreed with a potential return to the deal. In addition, Al Monitor reports that Saudi Arabia has requested to be made part of any pact. French President Emmanuel Macron has supported the latter, although Iranian officials rebuffed the idea.