Hopes for a Sino-American consensus over climate change 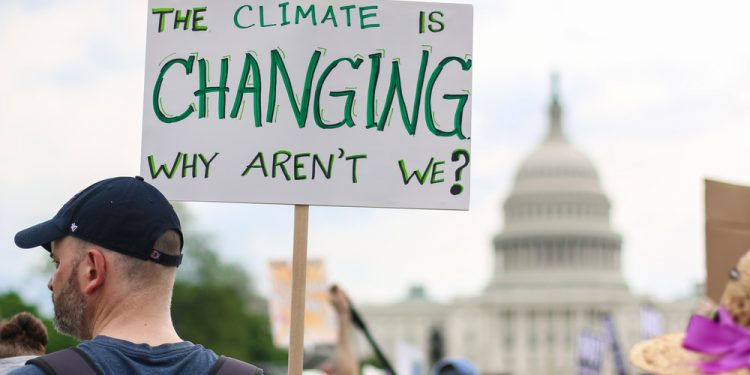 Thousands of people attend the People's Climate March to stand up against climate change.

Brussels (Brussels Morning)  President-elect Biden’s appointment of former Secretary of State John Kerry as climate envoy signals that the incoming US administration is serious about climate change. This point of departure could help reboot the fraught US China relationship.

While Donald Trump refused to heed the sense of urgency conveyed by his senior military and intelligence advisers, the Biden administration considers climate “an existential threat,” the expression used by Vice President-elect Senator Kamala Harris when she debated Vice-President Mike Pence on 7 October. .

In fact, the incoming administration seems to be framing climate change as nothing less than a “national security threat.” This echoes expert opinion published by the National Security, Military, and Intelligence Panel (NSMIP) at the Centre for Climate and Security.

When former Senator Kerry announced his appointment as Special Climate Envoy on Twitter, he noted that “America will soon have a government that treats the climate crisis as the urgent national security threat it is.” That is a bold statement that carries institutional weight, given that as a Climate Envoy Kerry will also have a seat on the National Security Council.

The need for collaboration, technology exchange, and joint research is self-evident. The two countries are the world’s largest polluters. In 2019 China accounted for 27% of global Green House Gas (GHG) emissions; the United States ranked second with 13%. However, in per capita terms, the US emits twice as much as China and ten times more than India.

All three major polluters need to cooperate because they compete. In political terms, neither emerging nor developed economies can afford to jeopardise their development and standards of living while overhauling their energy policies. Cooperation to decarbonise these economies is no small challenge. In Washington there seems to be a political consensus over containing Chinese growth, with the narrative of strategic rivalry and great power competition prevailing.

That is where John Kerry’s experience may prove key, given that he took part in the consultations and negotiations that led to the understanding between President Obama and President Xi Jinping in 2014, which in turn helped set the stage for the Paris Agreement a year later.

Of course, things have changed since the Obama Administration. Now, China is co-authoring the agenda. Some major issues remain to be solved: the objective of carbon neutrality pledged by China’s Xi Jinping’s in September is not enough to meet the Paris objectives.

But Sino-American cooperation is now likely to gain new momentum. Specifically, there is now hope for the resuscitation of the U.S.-China Climate Change Working Group (CCWG) which Kerry launched in April 2013. The forum remained largely dormant during the Trump Administration, when even the term “global warming” was purged from official documents.

Across the board, the new US administration is breathing new energy into Track II diplomatic efforts, energising the engagement of all stakeholders — governments, diplomats, international organizations, academics, the business community, international advocacy groups, and politicians. High level consultations, often brokered by veteran negotiators, involve the assessment of incoming raw data, the assessment of their environmental and social significance, and the examination of technological options.

Think tanks, technology hubs, environmental and economic institutes are involved in frenzied preparation of potential roadmaps. These are the people that help putting together the policy menu for the negotiations at Glasgow COP26. An emerging consensus sees China’s engagement as vital to global climate and economic governance.

A new Beijing Consensus on climate neutrality is taking shape

A report published by the Asia Society Policy Institute and Climate Analytics frames expectations vis-à-vis both China and the United States.

Entitled “U.S. and China Climate Goals: Scenario for 2030 and Mid-Century,” the report was released this month, just days after the appointment of former Australian  Prime Minister Kevin Rudd at the helm of the institute. The report’s main takeaways largely coincide with the outcomes of two authoritative Chinese studies presented on 22 October at Tsinghua University during an ad hoc event to outline China’s “Long-term Low-carbon Development Strategy and Pathway”.

These documents address the crucial question of whether China’s ambition can be limited to reigning over only CO2 emissions or will it extend to all greenhouse gases (GHGs). While climate neutrality is not yet an official government position, the two reports prove that the discussion is ongoing in China. The outcomes will define the structure of the upcoming 14th Five Year Plan. As the top EU official Mauro Petriccione noted last week in an interview with Brussels Morning, this single parameter can make or break the objective of keeping global temperature gains below the 1.5C benchmark by the end of the century. This parameter is on the top of EU-China negotiations.

China’s ambition nears European ambition. But the American piece of the puzzle is equally significant.

According to Kevin Rudd, “it’s fair to say that the pace of China’s implementation, and the intensity of the implementation [of the Paris Accord], has eased because there is a lack of international pressure from the United States.”

Washington’s U-turn on climate policy since the 2016 election undermined the credibility of US commitment and, indirectly, Chinese commitments as well. Washington’s return to the table restores the balance of power necessary to maintaining the Paris Agreement on track.

“President-elect Biden’s victory is clearly a massive shot in the arm for the international fight against climate change,” the former Australian Prime Minister states. This means that “notwithstanding some of the limitations he {Biden} is likely to face from the Senate in implementing his domestic agenda,” there is now more hope for a much needed breakthrough  in Glasgow.