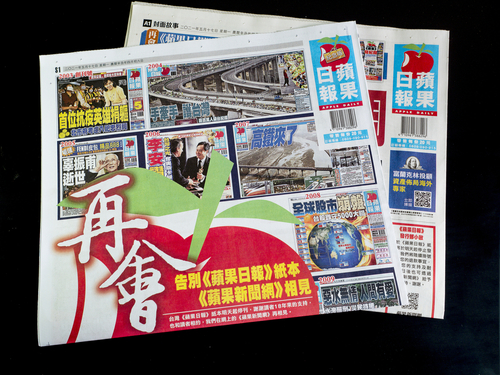 Brussels (Brussels Morning) Hong Kong’s pro-democracy tabloid Apple Daily published its final issue on Thursday, after being forced to cease operations by the authorities’ heavy-handed crackdown on its publisher, its assets and its managerial structure.

The paper’s owner, tycoon Jimmy Lai, was arrested last year for attending democracy protests and has since been charged with colluding with a foreign country, under the controversial National Security Law. Western democracies and the Special Administrative Region’s pro-democracy opposition maintain that the primary purpose of the law has been to stifle political and press freedoms in the former British colony.

The paper’s offices were raided last week by more than 500 law enforcement officers, who sifted through all of the journalists’ notes and records. Five of the paper’s executives were arrested in the raid, including its editor-in-chief Ryan Law and his deputy Chan Pui-man. Law has since been charged with conspiracy to commit collusion with a foreign country and denied bail.

Hong Kong has come increasingly under the control of the Chinese Communist Party (CCP) with the removal of the legislature’s largely pro-democracy membership as so-called electoral reforms were put in place to prevent their return in any significant number. The authorities, also clamped down the newspaper’s finances by freezing the assets of companies related to Apple Daily, and effectively preventing its further publication.

Anticipating a huge demand for the final issue after its six-year run, one million copies of the paper were printed and reportedly snatched up so quickly by Hong Kong citizens that many vendors sold out within minutes.

The paper’s closure drew international condemnation. The EU’s spokesman said it was clearly evident that the National Security Law is being used to stifle press freedom and free speech, principles that had been enshrined in the 1984 Sino-British joint declaration, which promised a high degree of autonomy for Hong Kong.

Beijing’s ambassador to the EU responded by accusing the bloc of breaching international law by “blatantly interfering in Hong Kong’s affairs, which are China’s internal affairs”. China maintains that freedom of speech and a free press are protected in Hong Kong, but that “no one has any privilege above the law to sow trouble in Hong Kong and China at large”.