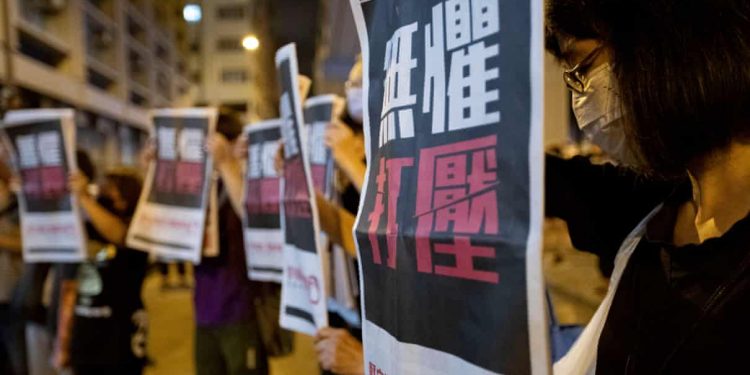 On Monday when Zoe*, a local news reporter at Apple Daily returned to her office in Hong Kong it was swarming with police officers. Her boss, the strident pro-democracy activist, media mogul and billionaire Jimmy Lai, was in handcuffs as police led him through the newsroom.

Cordons were set up blocking journalists from their desks as police rifled through papers and packed 25 boxes of documents for further investigation. Zoe was ordered to tell the police her home address and phone number and the section of the paper that she worked on. For hours, staffers were followed wherever they went in the building, even to the toilet. She was told not to report on the raid.

“The place was absolutely packed with police guarding every corner and stairway. I was terrified,” she said, asking not to disclose her name. “When I saw my boss being handcuffed and led away, I felt so heartbroken and helpless. I feel so angry,” she said.

After authorities arrested Lai at his home on vague charges of collusion under Hong Kong’s newly implemented national security bill, hundreds of police officers raided the headquarters of his paper, Apple Daily. Lai was bailed 40 hours later. His arrest and the raid on his paper signal what journalists and media observers say is the clearest sign the city’s independent free press has now entered a new, darker chapter.

“China sees the role of the media as to serve the regime … now it is imposing this view on Hong Kong,” said Mak Yin Ting, veteran journalist and former chairwoman of the Hong Kong Journalists Association.