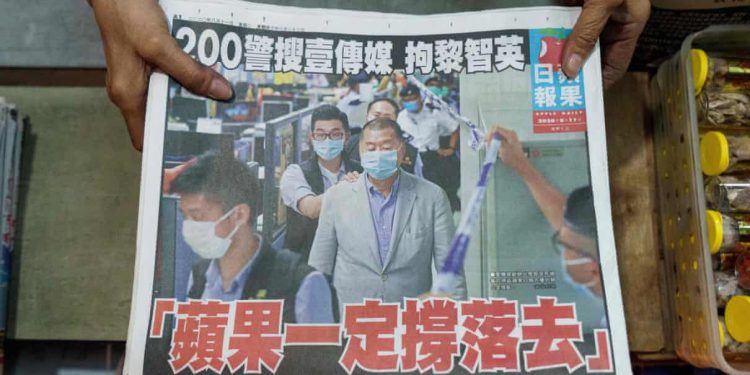 Hong Kong residents have rallied behind the pro-democracy newspaper Apple Daily after its founder Jimmy Lai was detained under a controversial national security law being used to crack down on dissent.

Residents lined up from 2am on Tuesday, hours after the daily tabloid’s offices were raided by police following Lai’s arrest, to buy copies of the paper in a show of support. Many purchased the paper in bulk, leaving notes in convenience stores urging others to take a copy. Others left stacks of the paper on stairs or in their apartment compounds. One reader wrote to the paper: “Even if Apple Daily only publishes a bundle of blank sheets, we will be buying all of them.”

Ping Ng, 55, got up at 6am to buy a copy of the paper. By the time he had breakfast in his neighbourhood a few hours later, the local convenience stores and newspaper stalls had already sold out of copies of Apple Daily.

“Yesterday, Hong Kong people were very angry. We would have even bought a blank Apple Daily paper today,” he said. “I want to defend the value of freedom of the press and freedom of speech. Disappointment, fear and pain are in my heart but I tell myself every day to persevere.”

Pro-democracy politicians and residents posted photos of themselves with the paper under the hashtags #SupportAppleDailyand #WeNeedAppleDaily. An image showing hands holding up an apple, the paper’s logo, has circulated online, with the same message.

The share price of Next Digital reached a six-year high after rising more than 300% on Monday following Lai’s arrest. By Tuesday afternoon, it had soared more than 500% from the previous day’s closing price. Residents also lined up outside the Cafe Seasons restaurant of Lai’s son Ian Lai, who was also arrested, wearing yellow face masks – the unofficial colour of the protest movement.

Apple Daily has become the latest flashpoint in a crackdown on activists and pro-democracy protesters in Hong Kong in the name of national security. The paper, known for its sensational, tabloid-style reporting, remained defiant on Tuesday following the arrest of its founder and nine other senior staff.

The paper printed 500,000 copies, up from the usual 100,000, with a photo of police walking Lai away splashed across its cover and the headline: “Apple will fight on.”

In an editorial, published in both its English and Chinese versions, a senior writer at the paper, Li Ping, blamed the raid and arrests on the ruling Chinese Communist party (CCP) lashing out after the US placed sanctions on Chinese officials last week over the security law, seen as a crushing blow for civil freedoms in Hong Kong. By arresting Lai, a prominent pro-democracy activist, Beijing “can kill three birds with one stone”, the editorial said.

“The CCP can throw a tantrum and unleash its fury, display again to the world its wolf-warrior strength and power, and intimidate Hong Kong media and people with precedents of criminal consequences when one colludes with foreign forces under the [national security law],” Li wrote. “However, the CCP and Hong Kong’s pro-CCP camp is going to be sorely disappointed. Hongkongers are gutsy.”

On Monday, Lai, a media tycoon, was detained over suspected collusion with foreign forces in what is the most high-profile arrest under the new national security law, passed in June in an unprecedented encroachment on the territory’s sovereignty under the one country, two-systems framework.

A total of 10 people were arrested on Monday, including other executives at the paper and activist Agnes Chow, a former leader of the pro-democracy group Demosisto, which disbanded hours after Beijing announced the passage of the security law.

On Monday, almost 200 police searched Apple Daily’s office for nine hours, collecting 25 boxes of evidence and taking down the personal information of staff who returned to the office, according to the paper.

“Being treated like suspects have made our colleagues feeling humiliated and pressurised,” Li wrote.

On Tuesday, police continued their investigation, taking Lai in handcuffs to search his yacht at the Hong Kong marina in Sai Kung.

Pro-Beijing outlets applauded the arrests of Lai and others, with the Global Times posting on Weibo that the move “greatly encouraged” Hong Kong and Chinese society.

On Monday evening, the US vice president, Mike Pence, called the arrest of Lai “deeply offensive and an affront to freedom-loving people around the world”. US secretary of state, Mike Pompeo, wrote on Twitter that the arrest was “further proof that the CCP has eviscerated Hong Kong’s freedoms and eroded the rights of its people”.

The new security law bypasses the city’s own legislature, bars secession, subversion, terrorism or collusion with foreign forces with punishments including life in prison. Beijing says the law is needed to curb instability caused by anti-government protests last year.

Officials promised the security law would not impinge on civil liberties not enjoyed in mainland China, including the right to free speech and assembly as well as the presence of an independent and free press.

But critics and protesters say the crackdown has been swift. In less than six weeks since the law was passed, authorities have arrested people for holding Hong Kong independence flags, outlawed protest slogans, given police powers to censor the internet, and delayed a legislative election in which opposition and pro-democracy figures were expected to make gains.

On Tuesday, China’s top legislature said the current legislative council would stay in office until the election, including four pro-democracy lawmakers who had been disqualified from running.

Apple Daily said in its editorial on Tuesday: “In this current Hong Kong, under the darkest of the skies, and the coldest of the freezing grounds, there are glimmering moments and warm places. Having you with us together, Apple Daily shall fight on!”